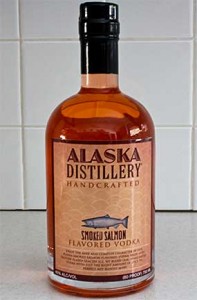 A recent recipe for Salmon Rumaki calls for bacon to be marinated in “Smoked Salmon Vodka.” Reader Manju asks, “What is salmon-infused vodka? Did I miss an article somewhere?”

Smoked Salmon Vodka is a product developed by Alaska Distillery, a micro-distillery “located at the foothills of the Alaska Range” (a marketer’s way of describing Wasilla). Alaska Distillery says its most notorious product is “the first smoked salmon flavored vodka ever produced [and] has a rare and complex character.”

In the ADN article, Foster described how he makes Smoked Salmon Vodka: “The distillery buy[s] a bunch of smoked salmon from local stores. ‘We skin it, debone it, defat it, shred it,’ Foster said. Then the workers put the shredded salmon into ethanol and let the ethanol absorb the flavors for a while. Then they strain the ethanol and add a small amount of the ethanol — roughly 10 milliliters — to a bottle. ‘It’s very little. I can speak from experience how much not to use,’ Foster said.”

The dominant flavor in Smoked Salmon Vodka is smoke, with a light aftertaste of salmon. It isn’t a beverage to drink straight, but makes a tasty Bloody Mary. It also works well for Oyster Shooters.

Next Post: Kavourmas (Greek Pork Confit) as Made on a Greek Island