Kavourmas (Greek Pork Confit) as Made on a Greek Island 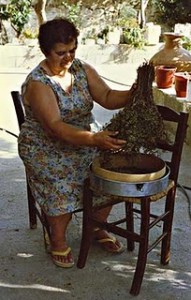 In honor of the recent publication of Tastes Like Home’s 2nd Revised Edition, I’m rerunning this article, originally published on November 10, 2007.

Every cook worth her salt has mentors who influence and inspire in different measures. From Froso, I learned the importance of using local ingredients at their seasonal peak, and the degree to which good cooking and quality ingredients are inextricably entwined. I couldn’t have written Tastes Like Home: Mediterranean Cooking in Alaska if Froso and I’d never met.

I first sat at Froso’s table over 25 years ago, as her cousin’s new wife. She spoke no English. I spoke no Greek. Nonetheless, she welcomed me into her kitchen, the center of family life, with open-hearted hospitality.

A shared love of food and cooking was our first common language. During our first days together, and continuing over the next 26 years, I’ve watched, tasted, and helped Froso prepare an amazing abundance of food from what she, her family, and her friends grew or gathered, all within walking distance of her kitchen.

Froso lives in Atsiki, the small, vibrant farming village where she was born, on Limnos, a rural island in the northern Aegean Sea. Once from necessity and now by choice, the foods that grace Froso’s table come almost exclusively from the bounty of her garden, fields, and pastures, the island’s hunting grounds, and the rich waters of the surrounding sea. 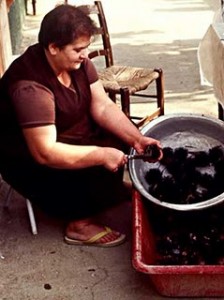 Froso learned to cook beside her mother, when the island was an isolated province, and Greece still reeling from ten years of war. Preparing food was hard in those days. There was no refrigeration and every drop of water was fetched from a neighborhood faucet several blocks from the house. Cooking was done on a two-burner gas camp stove, and baking in a wood-fired outdoor oven.

Life in the village today is easier. Froso has running water, a working range, and a microwave oven. The village has a half dozen tiny, one-room stores where Froso can buy staples and prepared food from far off the island. Few of these products actually find their way into Froso’s kitchen. She makes only the traditional foods she learned as a girl, using the same ingredients gathered in the same ways from the same places.

Froso’s meals are crafted from island ingredients in season. Like many Greek cooks (and the best cooks everywhere), φρεσκάδα (freskatha), the freshness of her ingredients, underlies everything she prepares. If Froso is complemented on a dish, she never credits a recipe or cooking technique, but only her ingredients. If pressed, she might mention a special flavor imparted by the particular place foods grew or were raised. When Froso preserves food for future use, it’s always during each food’s season of abundance and peak ripeness.

When okra is abundant, it appears at Froso’s table frequently. When artichokes in Froso’s yard are heavy with buds, they become the center of her meals. In late fall through early spring when wild greens are abundant, Froso spends the long hours necessary to prepare greens for salads and hortopites (wild greens pie). 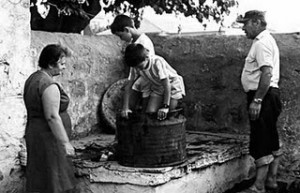 The eggs she uses are gathered from hens in her back yard and those that wander freely on her farm. The flour that Froso mixes on the kitchen table to make noodles, bread, and filo is milled down the street, a day or so before it is used, from her husband Zafiris’ wheat. The wine she serves is made by Zafiris in the amphora set deep into her yard.

Froso’s dishes start with olive oil – never butter, which even today is not available in the village. Traditional cheeses, made by Froso and other local women in seasons when the sheep and goats are producing lots of milk, are served at every meal. Food is flavored with fennel, dill, mint, and parsley, all of which grow a few steps from Froso’s front door, in her kitchen garden.

When the fish monger drives through town, hawking his wares with a megaphone, Froso buys only the cheapest fish available — locally caught, small, and bony — because they’re the ones with the most flavor. In many ways, Froso is a simple cook, but a simple cook who uses her unerring taste buds to produce consistently delicious food.

When we first met, the village didn’t have its own meat store. In those years, Froso raised a yearly pig in the back yard. Slaughtered in winter, every part of the animal passed across Froso’s table. The liver, kidneys, and other edible internal organs were fried immediately and served with ample homemade ouzo to the butchers and onlookers. The next day’s meal would be a prime cut of pork. The head, ears, and feet became headcheese. 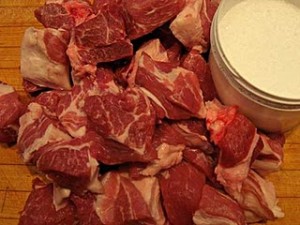 Before the days of refrigeration, Froso preserved most of the pork by making kavourmas, slow-cooked pork similar to a French confit. Kavourmas was traditionally made the day after slaughtering the pig. Meat was cut into chunks, salted overnight, and cooked slowly in its own fat, which Froso calls voutero (butter). The voutero was supplemented with sesame or olive oil, and the meat cooked until it was moist and tender. When fully done, the finished kavourmas was packed into crocks, covered with rendered fat, and stored in a cool place for use over the coming months.

Froso continues to make small batches of kavourmas for its special, salty flavor. She cooks it with eggs, in dried beans and vegetable stews, or with onions as an accompaniment to ouzo. Although it must cook for a couple hours, kavourmas is simple to make and requires little attention from the cook.

Last summer, Froso and her husband Zafiris debated whether today’s kavourmas is as good as it was in years past. Zafiris thought the traditional version he remembered was better. He claimed the better, old-time flavor came from sesame oil added to rendered pig fat to ensure the meat wasn’t exposed to air. He insisted sesame oil has a more complex favor than the olive oil used today for the same purpose (when Zafiris was a child his family ran a sesame mill).

Froso thought Zafiris preferred old-style kavourmas because it was cooked in pig fat, not sesame oil. Today, when making kavourmas, Froso discards most of the animal fat and cooks the meat in olive oil. She says kavourmas made this way is healthier and tastes better.

What follows is Froso’s modern version of kavourmas: When we eat it in Alaska, we feel the presence of Froso at our table, without whom our meals would be much the poorer.