Hard-to-Find Dried Okra Worth Seeking Out 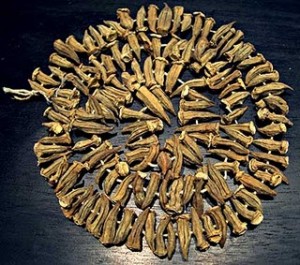 I’m addicted to unusual ingredients. If an herb, spice, or other comestible is one I’ve never heard of, I buy it immediately. Figuring out how to use oddball items helps extend our always too short vacations.

Yesterday I hit the ingredient jackpot and didn’t have to leave Anchorage to do it.

While sharing morning coffee with friends Marie and Ankine, our conversation turned to ingredients we bring home from travels because they aren’t available in Alaska. Marie included dried okra in the list of foods that fill her luggage.

Dried okra? My ears perked up. I’d never heard of dried okra, and was full of questions. Where did the dried okra come from? How did Marie use it? How is the okra dried?

Marie opened the refrigerator and removed a jar of the tiniest okra I’d ever seen. Baby okra, 1” long, had been strung on cotton string like a necklace and dried until hard. Marie’s okra came from Turkey, via a California speciality market.

Every year I spend the end of summer in a Greek farming village. It’s a time of abundance and we eat what’s in season, including okra. I’ve prepared lots of okra, usually the size of my little finger. Cleaning normal size okra is time-consuming; cleaning okra so much smaller seemed as if it would take interminably long. I marveled at how much work went into preparing the string of baby okra Marie was holding.

In Marie’s native Lebanon, she said people prefer tiny okra and pick it when it’s no longer than the last joint of a woman’s little finger. When she lived in Lebanon, Marie bought big bags of fresh baby okra in season. She strung the little okra together, hung them to dry, and used these summer morsels to enhance winter meals. This is not possible in Alaska where okra comes from the supermarket and is often only available frozen.

Marie insisted on giving me a string of baby okra, weighing it out precisely at 50 grams (1/8 pound), the right amount to make dinner for two. She also gave me one of her Armenian-Lebanese recipes for cooking dried okra. 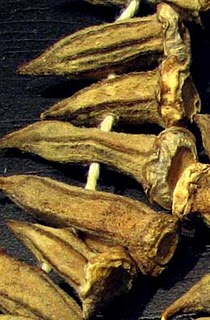 Buying Dried Okra: In the United States, you’re unlikely to find a local source for dried okra unless you live in New York City, Chicago, or Los Angeles. Order dried okra online from Parthenon Foods directly or via Amazon, or from Kalustyan’s, a specialty food store in New York City.

Dried Okra Trivia: The first Armenian cookbook in the United States (The Oriental Cook Book; Wholesome, Dainty, and Economical Dishes of the Orient, Especially Adapted to American Tastes and Methods of Preparation), was written by Ardashes Hagop Keoleian in 1913. Feeding America: The Historic American Cookbook Project, Michigan State University’s effort to create an online collection of influential early American cookbooks, has a digital copy of the book available for downloading.

About okra, Keoleian says: “The flavor is not agreeable to most people at first, but it is one of the best vegetables known for food. It is used fresh, also sold strung-on-threads in dried condition. It is put up in cans, too. A delicious food, especially good for invalids. The price of dried okra is 40 cents per pound.”

Dried okra was apparently as hard to find in 1913 America as it is now; the author kindly told his readers that dried okra “may be had, on short notice, by writing to the author, A.H. Keoleian, care of the Publishers, New York City. All orders should accompany with an additional sum of 10 per cent of the value of the order, for packing purposes, etc.”

10 Responses to Hard-to-Find Dried Okra Worth Seeking Out

Next Post: Kitchen Creativity: How to Use Fresh Figs