A few days ago we left At 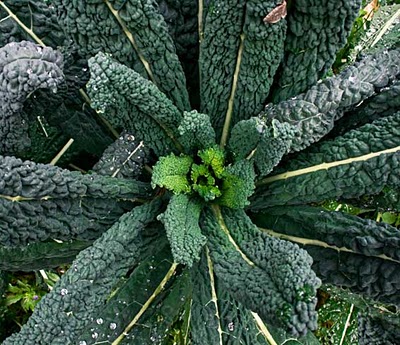 hens on a sunny 80°F day, warm enough to welcome airport air-conditioning. Thirty-six hours later, back in Anchorage, the sun still shone, but the temperature was only 40°F. A chill north wind cut through the lightweight clothing I’d donned on another continent.

When we arrived home, the first order of business was inspecting the garden. We’d heard there’d been a killing frost in Anchorage, so expected the worst. Zucchini, peas, Swiss chard, and most lettuce had been taken out by the cold. Broccoli and cauliflower had gone to seed. Cabbages were perfect and ready to harvest, as were arugula, garlic, onion, herbs, and a small second planting of Lau’s pointed leaf lettuce that inexplicably was unaffected by frost.

Our garden’s overall success this year was due, in no small part, to fortifying the 8’-10’ fence that encircles our garden, a height necessary to keep out marauding moose. Moose handily hop over any fence shorter than 8’, and like nothing better than grazing through a carefully tended garden smorgasbord.

For whatever reason, perhaps 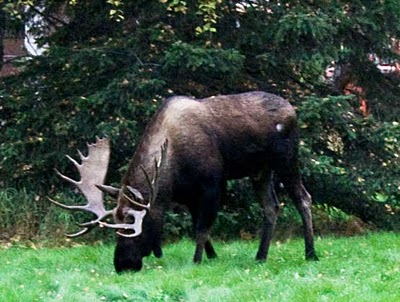 the large pond that serves as a watering hole, our yard is a moose hotspot. In the first 40 minutes after arriving home from the airport, we saw five different moose in the yard, including the giant bull pictured above. With this many moose, if we didn’t have a fence, we wouldn’t have a garden.

The garden’s best producer this year was Tuscan/Lacinato/dinosaur kale. The blue-green strappy kale leaves are lush and healthy despite nighttime temperatures well below freezing. Its perfect condition is remarkable; nearly every other garden plant was plagued by a horde of slugs brought forth by this year’s record-breaking rainy summer.

One of my favorite ways to use greens of every kind is in savory pies. Spanakopita and hortopita, Greek spinach pie and greens pie, are two particularly good ones. I needed to bring a dish to a potluck on Friday and thought of making a traditional hortopita with kale. However, to do so I would have either had to go to the store to buy filo or mess around with making my own. Proper home-made Greek filo was too big of a task for my jet-lagged mind, as was grocery shopping. 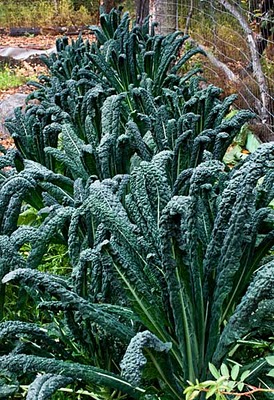 A couple months ago, I had a wonderful spicy meat pie made by Ayse Gilbert, an Anchorage friend of Turkish heritage. Ayse is an excellent and creative cook. To encase her pie, she’d used a crunchy, flaky, sour cream pastry. Her recipe in its entirety: “2 1/4 cup flour (use 1/2 cup semolina flour for crunch), 12 Tbsp. butter, 1/2 cup sour cream, and 1 egg.”

Having a kale glut seemed like the perfect opportunity to try Ayse’s crust recipe. I used Greek yogurt, an ingredient I always have on hand, rather than sour cream. Both ingredients are acidic, and work equally well to tenderize the crust. The dough mixed up easily and was a pleasure to roll out. It didn’t tear or stick to the rolling pin and was easy to move from the pastry cloth to the baking sheet. This is a good crust recipe for beginners; it’s much easier to work with than standard pie crust dough.

With the tangy crust, I wanted a little sweetness to complement kale’s earthy flavor, so included dried currants and lightly sautéed onions in the filling mix. Feta always goes well with greens and I’d just brought some back from Greece that’d been mauled by a customs agent (don’t get me started) and needed to be used right away. So feta went in the mix, along with some garlic and Aleppo pepper.

Having never made either the crust or filling before, I nonetheless brought it to the Friday potluck. I warned longtime friends that my offering was experimental. Luckily, the gamble paid off. The filling was well-balanced and its flavors worked well with the deliciously crunchy, flaky crust. Best of all, my friends liked it, the true measure of a recipe’s success. 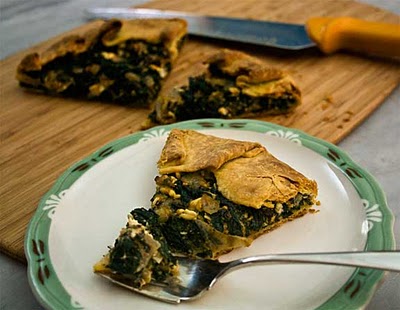 I made the recipe a second time yesterday, freezing half the crust dough and cutting the filling recipe in half. It was just as good the second time, and certainly more attractive. I figured out big flat pleats are the best way to get dough to lay flat around corners. I could’ve called this a pita or a pie or a tart. But I’ve called it a galette because the pleating technique I settled on is one the French use when forming galettes.

Three kale plants down. Twenty-seven to go. Maybe more. Lucky we both like greens.