For Cooking Lesson #1, I took Nora Morse to some of my favorite Anchorage ethnic stores. Since April 1, Nora and I have been chatting about the stores we visited. Lesson #1 (all 4 parts) is the first of a series of columns Nora and I are writing about her cooking lessons. Lesson #2: Knife Skills is scheduled to run next. 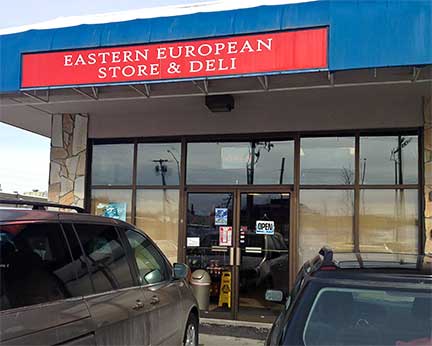 Nora: Our last stop was at the Eastern European Store & Deli on the north side of W. 36th Street between C Street and Arctic Boulevard.

Laurie: The first Eastern European Store & Deli opened in Wasilla 6 years ago. The Anchorage store has been open 4 years.  Maria Melnick, the owner, and Anastasia Natekina, who works at the Anchorage store, are from Rostov-on-Don, a large port city in Southern Russia. 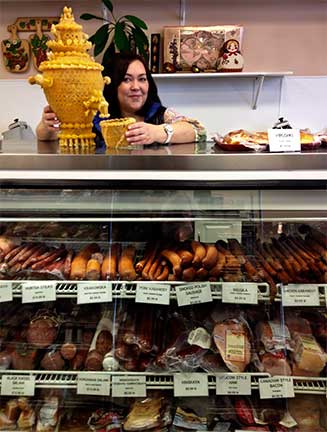 Anastasia Natekina behind the deli counter at Eastern European Store & Deli (Photograph by Laurie Constantino) Samovar in picture is handmade out of various shapes of dried pasta.

Anastasia speaks English well and is happy to interpret labels or explain how to use unfamiliar products. Nora, I wish you’d been with me when I went back for the interview. Anastasia was really interesting. She’s one of 16 children: “one mother, one father, no twins.” She likes her job and it shows.

Nora: At first I thought it was a candy store. Wherever I looked, I saw candy, and sweets, and chocolates, and cookies, and more candy. It was like Willy Wonka in there. I mean there was also a great selection of teas and meats and such, but whoa the candy!

Laurie: I didn’t even notice the candy. Seriously! I wish this meant I’d kicked my sugar addiction but, sadly, it reigns supreme. The packaged sweets didn’t register because I was too busy looking at European baking ingredients, and thinking about baking cookies and cakes at home. Sugar 1, Laurie 0.

Sweets aside, the Eastern European Deli has many tempting treats. I particularly like the house-made cheese pierogi (think of Eastern European ravioli). They take 3 minutes to cook in boiling water and go well with a wide range of sauces. My four favorite ways to eat pierogi: coated with tomato pasta sauce, drizzled with aged balsamic vinegar, swimming in mushroom soy sauce, and lightly sprinkled with truffle oil and truffle salt. Speaking of luxury ingredients, I bet they’d also taste amazing with foie gras grated over (similar to french fries with foie gras grated over as I recently enjoyed at Marché Bistro in Seattle).

Shoot! I made myself hungry for pierogi, but we don’t have any left. Better go back to the deli! 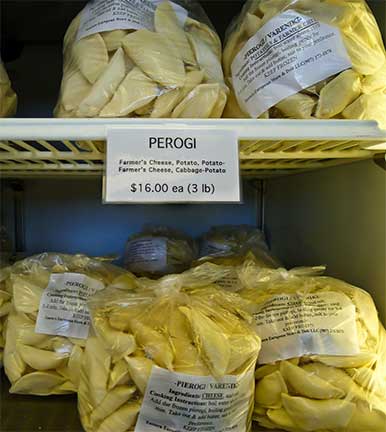 Nora: We got small samples of sesame and peanut halva, a common sweet in the Balkans and Middle East. The halvas were great and very sweet. The best thing about them was their texture. It’s a little dry, crunchy, and straw-like while at the same time it’s moist and melts in your mouth.

Laurie:  Get Thee Behind Me Satan!! No more talking about candy. Well, okay, the halva is delicious, and the texture kind of like Butterfingers, but I’d rather pretend the candy isn’t there at all. I’ll obsess instead on the farmer’s cheese, the wide selection of salamis and preserved meats, the pickles, the salads, or even the delicious pierogi.

Nora: The other highlight (besides candy!), is the freshly baked German breads. The Eastern European Deli flies in bread dough from Germany and bakes it on-site for a unique bread selection! (COOL!) 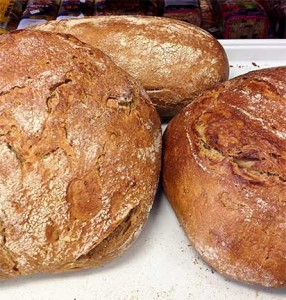 Laurie:  The dark German breads are firm and full of flavor, especially when you happen into the deli when the bread is just out of the oven. Last time I was there, I lucked onto a warm tray of cheese piroshki. So good! If you want to make people happy, bring them warm cheese piroshki.

It’s hard to pick a favorite, and what I like best changes all the time, but I’m currently infatuated with Eastern European Deli’s preserved meats. I put smoked pork shoulder in cassoulet, sliced suho meso (smoked dried beef) thinly for an appetizer tray, and used Bosnian Sudzuk (smoked beef salami; σουτζούκι/soutzouki in Greek) as a topping for Spicy Bean and Tomato Stew. We had the beans with soutzouki last night for dinner (recipe follows) and it was BETTER than candy. 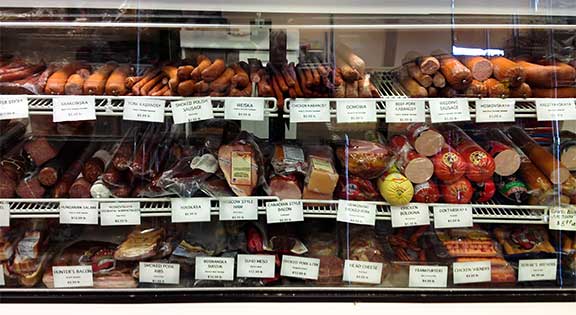 Nora: What our whole adventure boils down to is this: it’s super important to familiarize yourself with the various ethnic markets around town, no matter where you live. They are essential to finding rare ingredients, spices, and expanding your culinary prowess. It may sound a little crazy, but what I suggest is to just take a day and go on your own adventure. Go try new things and discover new ingredients. I really learned a lot and, not to sound too cheesy, it made me realize there is a great big culinary world out there that I know nothing about.  I got excited that there were new foods to try and flavors to combine. It was like a vacation right here in Anchorage! Happy travels!

While at Eastern European Market and Deli, I bought Soutzouki (aka sujuk), a smoked beef sausage eaten throughout the Balkans and Middle East. Soutzouki tastes wonderful eaten with beans. I used the sausage as a garnish for my favorite Spicy Beans and Tomatoes Politika recipe. I’d doubled the recipe and thought I had plenty, but with guests having seconds and thirds, we didn’t have leftovers. Guess I need to head back to the Eastern European Market sooner rather than later!

[This is the final installment of Cooking Lesson 1: Know Your Markets. Monday (April 1) we wrote about Central Market (north side of Northern Lights in the Valhalla Center), April 2 about Lucky Market (northeast corner of Arctic and International); April 3 about APA Asian Market (southwest corner of 36th and C) Wednesday; today we’re at the Eastern European Deli (36th east of Arctic)] 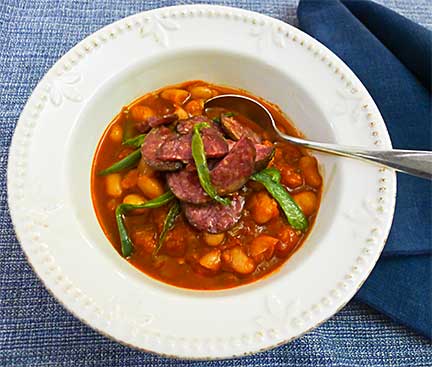 One Response to Cooking Lesson 1: Anchorage Ethnic Markets (Part 4 of 4)

Next Post: Laurie Constantino on TV: Salmon with Rosemary Honey