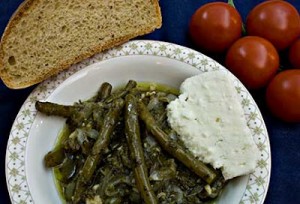 “If there are three Greeks in a room, you’re bound to hear five different opinions about the correct way to cook just about anything.”

Or so goes the self-deprecating joke at Holy Transfiguration Greek Orthodox Church in Anchorage, Alaska. Although it may not be literally true, the joke helps lighten the mood at festival time.

For the annual Greek festival held in August, parishioners join together to make classics of the Greek table. The correct ways to make Moussaka, Fasolakia (braised green beans), and Dolmades (stuffed grape leaves) trigger the most vigorous debates. Everyone knows the “correct” recipe, but none of them are the same.

At Mama’s Taverna, Lulu captured the essence of these debates as she described how Zoe came up with her wonderful Fasolakia recipe.

I no sooner sent the comment than I started obsessing about Fasolakia made without tomatoes (the most common recipe includes them). I used to make tomato-less Fasolakia all the time. In recent years I’ve been stuck on versions with tomato, one of which I wrote about in February: Greek Beef and Green Bean Stew and two of which are included in Tastes Like Home: Mediterranean Cooking in Alaska (Fasolakia and Fasolakia with Zucchini and Potatoes).

Last night I made the tomato-less version. It was everything I’d been wanting. The braised beans and onions were soft and sweet, rich with oil and herbs, and tangy from the fresh lemon juice finish. This is a dish where bread is a necessary accompaniment; it’s a shame to let the remarkably good juices go to waste.

Fasolakia belongs to a class of Greek dishes called Ladera, which means “oily” (ladi/λάδι is the Greek word for oil). The oil and vegetable juices cook together to make a wonderfully unctuous sauce. However, for many today, traditional Ladera has too much oil. Adjust the amount of oil in the recipe to suit your taste; for the traditional version, use the larger amount.

When considering the amount of oil to use, keep in mind that olive oil is a heart-healthy fat. According to the Mayo Clinic, “Olive oil contains monounsaturated fat, which can lower your risk of heart disease by reducing the total and low-density lipoprotein (LDL, or “bad”) cholesterol levels in your blood.” The FDA says there is “limited but not conclusive evidence” that 2 tablespoons of olive oil daily can reduce the risk of heart disease. (Olive oil should be substituted for fats already in the diet, and not just added to what you’re already eating.)

This recipe’s dedicated to Lulu and Zoe.

Previous Post: How to Harvest and Use Wild Dandelion Greens

Next Post: Eggs Rockefeller with Dandelion Greens and Hollandaise