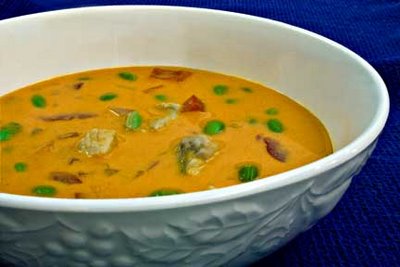 Fish and Vegetable Stew with Rouille

Where do recipes come from? Family, community, tradition, and serendipitous accident are easy but incomplete answers.The primary source of recipes has always been an individual cook’s imagination and palate. Over time, original recipes are modified by other cooks’ imaginations and adjusted by yet more cooks’ palates, to infinity and without limitation.

The food articles I enjoy most are ones that explain how a dish was developed or why a cook chose to combine certain flavors. Although its authors’ cooking styles and skills are quite different from my own, Ideas in Food is one of my favorite blogs. It focuses on the techniques and thought processes that go into creating unique flavor combinations.

I recently made Seafood and Vegetable Stew with Rouille. Here’s how it came into being:

My kitchen counter was overflowing with garnet yams, bounty from more than one Full Circle Farms CSA box. I wanted to do something other than oven-roasting the yams or making oven fries. Looking for inspiration, I randomly pulled cookbooks off the shelves.

Barbara Kafka’s book Soup: A Way of Life had an interesting recipe for Fall Fish Stew that included sweet potatoes. I decided to try it.

My first version of the stew was similar to Kafka’s, though I substituted sautéed sweet potatoes for boiled and edamame beans for limas. After tasting the broth, I wanted more flavor.

In my next version, I added sautéed onions and red bell peppers, and used a different Rouille recipe than Kafka’s. I seasoned the Rouille with dried, ground red Moroccan pepper (poivron rouge). This version was tasty, but I thought it could be better.

In my final version, I added crushed fennel seeds and shelled shrimp. This combination was exactly what I wanted. Although inspired by Kafka, the final stew is uniquely my own. 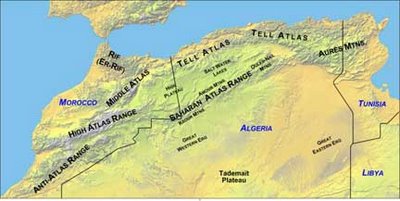 I internet-ordered poivron rouge from World Spice Merchants in Seattle, one of my favorite herb and spice purveyors. World Spice describes poivron rouge as “sweet red pepper … produced from sweet round red niora peppers grown in the lush valleys at the foot of the High Atlas Mountains to the northeast of Marrakech. 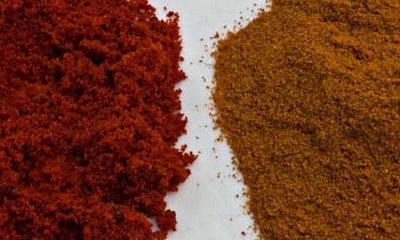 Although Moroccan recipes often call for paprika, niora peppers are what Moroccans use for “paprika.” The flavor of ground niora differs significantly from sweet Hungarian paprika. Niora is spicier and has a fruitier flavor than its Hungarian counterpart, which has a slightly bitter aftertaste.

Moroccan niora peppers are likely the same as the ñora peppers used in Romesco sauce and other Spanish and Catalonian dishes. In addition to having similar names, nioras and ñoras look the same. Most texts refer to nioras and ñoras only as members of the Capsicum annuum family; in other words, as domesticated peppers. However, in Catalan Cuisine, Colman Andrews says pepper scholar Charles Perry “thinks the nyora [ñora] pepper is the variety scientifically called Capsicum annuum grossum/provar. Pomiforme/sub-var. Conc. Humilirotundum Haz.”

No matter what its scientific designation might be, poivron rouge has wonderful flavor and a permanent place in my spice cupboard. Its mildly spicy and fruity tastes make distinctively delicious Rouille and a mouth-wateringly good Seafood and Vegetable Stew.