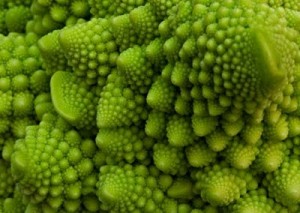 Vibrantly lime-green, with florets shaped like spiky Balinese temples whirling around a central core, Romanesco broccoli is an attention-grabber.

When I picked out a head at Saturday’s South Anchorage Farmer’s Market, the queries started immediately: “What’s that?” “What’ll you do with it?” “Is that any good?” Despite my enthusiastic assurances, some questioners remained dubious about Romanesco broccoli’s edibility. An engineer decided to buy one only after I told him Romanesco broccoli is used by mathematicians to illustrate logarithmic spirals and fractals. 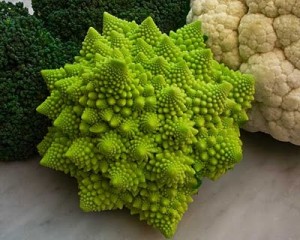 A relative of both broccoli and cauliflower, the flavor of Romanesco broccoli is milder than either of its better known cousins. When well-cooked, the flavor is creamy and nutty, without the bitter edge some family members have.

While everyone agrees Romanesco broccoli is a broccoli-cauliflower cousin, there’s lots of squabbling about its proper name. Italians first grew it near Rome in the 16h century and call it broccolo romanesco (Roman broccoli); hence the most frequently used American name.

Romanesco broccoli is good raw or cooked, and can be substituted for either broccoli or cauliflower in most recipes. Oven roasting at high temperature (475°F) tossed with salt and olive oil is my favorite way to cook it. I also like blanching it in boiling salted water and then sautéing it in olive oil with garlic and hot pepper flakes. See also, my recipe for Romanesco Broccoli, Cauliflower, and Brussels Sprouts with Mustard-Caper Butter.

After photographing Romanesco broccoli yesterday, I was so entranced by its form I couldn’t bear to cut it up. It deserved to be delivered to the dinner table intact, so that all could admire and appreciate its fractal wonders. I found a recipe that allowed me to cook and serve it whole: cavolfiore seduto (“sitting” cauliflower) from southern Italy’s Lucania region. Although it was delivered to the table whole, the fractals quickly disappeared as people dug into my Braised Romanesco Broccoli with Onions & Olives. I served it with fresh Alaska spot shrimp, one of my favorite seafoods, and ate so much broccoli I scarcely had room for shrimp.