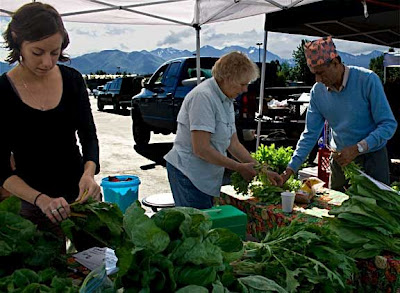 “Good morning! Where’s your farm?” The answer to my standard market question was a surprise: “Mountain View.”

Mountain View, a densely populated neighborhood within Anchorage’s urban core, is an unlikely spot for a market garden. “How much land do you have?” “8000 square feet.”

A commercially viable garden in Alaska on less than 1/5 of an acre? I looked again at the people staffing the booth. Of diverse ages and ethnicities, they didn’t fit the typical farm family image.

“Is Fresh International Gardens a farm? Or a group?” I hesitated. “Or what?” 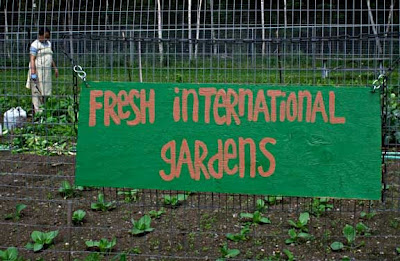 The answer: “Or what.” Fresh International Gardens is part of theRefugee Farmers’ Market Program. This program helps refugees, newly arrived in Anchorage, adjust to uprooted lives in a new country. In addition to gardening, the program teaches entrepreneurial and life skills essential to succeeding in Alaska. 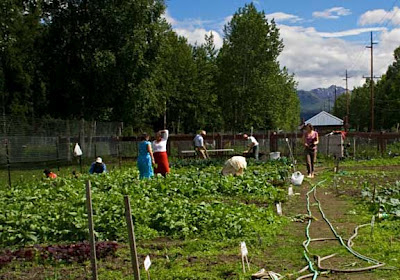 Most refugees working on the 2010 garden are originally from Bhutan. Over the last 10 months, a group of nearly 100 Bhutanese refugees began the challenging process of creating lives in Alaska after many difficult homeless, stateless years.

Bhutan is a land-locked country the size of Switzerland. It lies between China and India on the Himalayas’ eastern edge; Nepal is to the west. In the late 19th century, the Lhotsampa (meaning southerner in Bhutanese) began emigrating to Bhutan from Nepal, largely to work as laborers for the Bhutanese.

The Lhotsampa settled, built homes, and grew families in Bhutan. Life continued uneventfully until the late 1980s. At that time, the ethnic majority ruling Bhutan became worried about its ethnic group being outnumbered by Lhotsampas. To prevent this, the rulers began a program of ethnic cleansing, forcibly expelling many Lhotsampas from the country.

The forcible expulsions left over 100,000 Lhotsampas, including Anchorage’s new residents, stranded for nearly two decades in Nepalese refugee camps. It wasn’t until 2008 that various countries, including the US, began admitting Bhutanese refugees for permanent resettlement.

Last Thursday I went to the Fresh International Garden site on McPhee and talked with gardener and market entrepreneur Bishnu Subedi.

Subedi said he was forced from his home by the Bhutanese government in 1992. He lived in Nepalese refugee camps until Alaska welcomed him last year. “Seventeen years. Seventeen years, no home. Now, in Alaska, apartment. A home.” Subedi smiled, hesitantly. 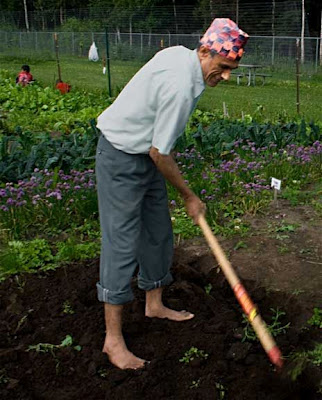 While we talked, Subedi and a fellow refugee cleaned and turned a new garden bed, planting it with spinach seed. The men were neatly dressed; their shirts freshly ironed. They deftly and swiftly worked shovel and hoe with bare feet.

Subedi is just now learning English, and spoke it haltingly. He described his plans: work hard, feed his family, get a green card, become a citizen. He laughed, shrugged, and said, “For now, have apartment. But is home. Home.” He smiled again, this time broadly. 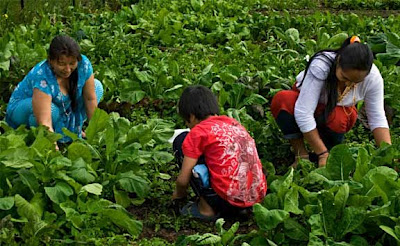 I walked further into the garden where three Bhutanese women were weeding beds of thickly planted greens. They heaped all but one kind of weed in piles for disposal. The women treated lamb’s quarters (Chenopodium album) differently. This plant was separated out and added to plastic grocery bags that were already full when I arrived.

Though weeds, lamb’s quarters are delicious edible greens. Since none of the women spoke English, I couldn’t ask if they planned on eating lamb’s quarters. Kelly Ingram, a Vista volunteer working for the Refugee Farmers’ Market Program, had an answer: the women used lamb’s quarters as an ingredient in curry. 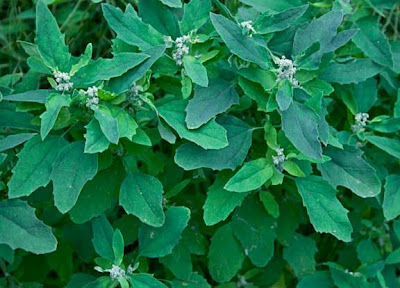 Wild lamb’s quarters are gathered for food all around the globe. Uniquely, the Himalayan region, where Lhotsampas survived in Nepalese refugee camps, is the one area in the world where lamb’s quarters are domesticated. It is grown there for its leafy greens and as a grain crop. Lamb’s quarters is a quinoa relative; up to 70,000 poppy-sized seeds grow on every plant. The seeds are ground into flour, cooked as porridge, made into alcoholic beverages, and used as livestock feed.

Unlike countries with subsistence economies, wild foraging is a rarity in modern America. Lamb’s quarters and other wild greens are usually seen only as noxious weeds that pop up in home gardens and interfere with efficient commercial crop production. As a result, few Alaskans have tried tasty lamb’s quarters.

Lamb’s quarters are related to spinach and Swiss chard, and can be substituted for those greens in any recipe. Its flavor is milder, and its leaves slightly firmer, than spinach. Although young lamb’s quarters leaves may be eaten raw, I prefer them cooked. Then again, I also prefer spinach cooked.

Of the wild greens that grow in Alaska, lamb’s quarters is one of the easiest to harvest. (First time foragers may want to review my Rules for Gathering Wild Plants.) Cut off the top 6-8” of each plant, remove any damaged or diseased leaves (look carefully, lamb’s quarters are susceptible to leaf miner damage), and strip the leaves and soft seed heads from the stem. These are ready to use in your favorite greens recipe; the stem may be discarded.

Lamb’s quarters thrive on land that’s been previously cultivated, or any place they can get an easy foothold. In my yard, they’re particularly fond of the topsoil pile, where loose dirt and ready nutrients attract a nice patch of lamb’s quarters every year. 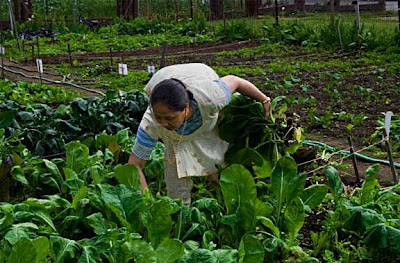 Returning from my trip to the Fresh International Gardens, I had a powerful hankering for lamb’s quarters. Lacking a Bhutanese curry recipe, but being rich in farm fresh eggs, I lunched on a Greek village favorite: eggs cooked on a bed of wild greens and tomatoes.
Lamb’s Quarters and Tomatoes with Eggs takes less than 30 minutes to make, including the time to harvest the lamb’s quarters (assuming you’re behind on your weeding so have lamb’s quarters readily available). Despite its simplicity and humble ingredients, the flavors are luxuriant: runny yolks combine with vegetable juices to form an enthrallingly rich sauce.