How to Use Cilantro, A Mainstream American Ingredient 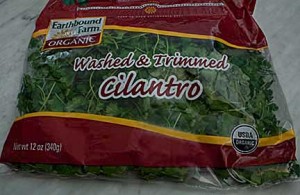 Cilantro, once exotic, is now firmly part of the mainstream American diet. How do I know?

Costco in Anchorage, Alaska, at the far reach of America’s supply chain, is selling fresh cilantro, washed and trimmed, in large, 12-ounce bags for $2.99. Cilantro is also sold at every Anchorage grocery store.

Twelve ounces of cleaned cilantro (3/4 pound) is a lot for a family to use, especially because cilantro is a delicate herb that spoils quickly. Hating waste, and loving cilantro, I’ve dedicated myself to finding delicious ways of using this versatile herb.

I can’t write about cilantro without mentioning the legions of Americans who can’t stand the stuff. Speaking on behalf of cilantro-haters everywhere, Julia Child once told Larry King, “Cilantro and arugula I don’t like at all. They’re both green herbs, they have kind of a dead taste to me…I would pick [cilantro] out if I saw it and throw it on the floor.”

In a 2010 New York Times article, food scientist Harold McGee tried to get to the bottom of cilantrophobia. He discovered cilantro aroma and flavor are mostly contained in “modified fragments of fat molecules called aldehydes.”

The same or similar aldehydes are found in soaps and lotions, accounting, in part, for why some people think cilantro tastes soapy. Genetics are another little-studied explanation for why some people perceive soapiness and others don’t. McGee talked to neuroscientists, however, who think there’s a better explanation for cilantrophobia than genetics.

When we taste something new, the brain searches its database of tastes and smells for something similar.  If there isn’t a past food match for the new taste, but there is a match for something that isn’t edible (like soap or lotion), the brain “highlights the mismatch and the potential threat to our safety.” The result? We don’t like the new food.

The brain, however, continually updates and changes its database and, thus, how we perceive food. If we keep eating food with cilantro in it, even if we initially don’t like it, our brains can learn to accept cilantro as safe. “It can still remind me of soap, but it’s not threatening anymore, so that association fades into the background, and I enjoy its other qualities. On the other hand, if I ate cilantro once and never willingly let it pass my lips again, there wouldn’t have been a chance to reshape that perception.”

In other words, with cilantro and other “unusual” foods, familiarity may breed enjoyment. Tasting a new food only once may not give your brain sufficent time to adjust to new and different flavors.

McGee also discovered a way to reduce cilantro’s “soapy” characteristic, for those who perceive it that way. “A Japanese study published in January [2010] suggested that crushing the leaves will give leaf enzymes the chance to gradually convert the aldehydes into other substances with no aroma… Sure enough, I’ve found cilantro pestos to be…surprisingly mild.”

With a tip of the hat to Harold McGee, and with hope of converting at least one cilantrophobe, today’s cilantro recipes all require crushing the leaves.

Between Cilantro Pesto and Cilantro, Parsley and Basil Sauce, I’ve used up my most recent bag of Costco cilantro. I’m ready to buy another (well, actually, my third, but who’s counting). I also use cilantro in Kookoo Sabzi, Moroccan Chermoula & Carrot Soup, and Asian Salmon Burgers with Lime, Cilantro & Edamame Spread.

17 Responses to How to Use Cilantro, A Mainstream American Ingredient

Next Post: The Moosewood Cookbook: A Cookbook, An Obsession, A Soup