How to Gather and Use Alaska’s Wild Mushrooms 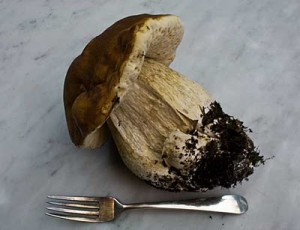 Steve arrived home from work last Friday, a briefcase in one hand and a massive Boletus edulis in the other. A smile of pure joy lit his face. “It’s time to go mushrooming.”

He handed me the mushroom, a king bolete, also known as porcino in Italy and cep in France. I weighed it: 1 pound 10 ounces. When I cut into it, the flesh was firm and pure white, untouched by worm, fly, slug, squirrel, or rot. I’d never seen anything like it. Normally, porcini this big have been heavily predated upon and are chock full of worms. 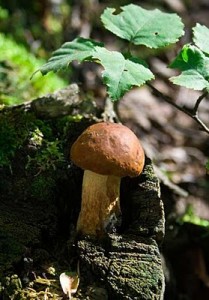 It’s been raining for weeks, so on went rain coats, rain pants, and waterproof hiking boots. Going mushrooming involves tromping through woods, pushing through understory, going up and down hillsides, seeking out terrain where desirable mushrooms thrive. Staying dry is key to maintaining proper enthusiasm.

Gearing up was next. It’s best to harvest into woven baskets, which allow air to circulate around mushrooms as they accumulate. It’s also easier to protect mushrooms from being crushed or broken by carrying them in a basket. If you harvest into plastic buckets or, worse yet, into plastic bags (which you should never use), the combination of moisture, weight, and jostling causes mushrooms on a bucket’s bottom to be bruised and slag down. 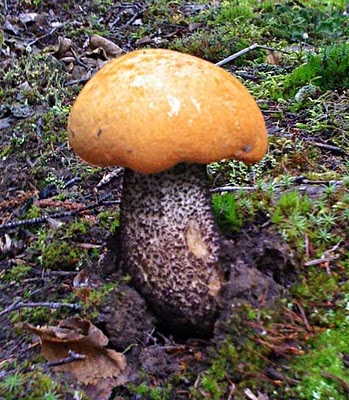 I dug out an old knife for each of us; mushrooms need to be cleaned immediately after being picked. A good sturdy stick is the final necessary piece of mushrooming equipment. The stick is used for pushing away grasses and underbrush in which mushrooms hide. It’s also very handy for ascending and descending steep slopes in search of a perfect fungus.

Raingear on. Baskets, knives, and sticks collected. We jumped in the truck, heading for one of the many expanses of boreal forest that dot the Anchorage landscape.

We parked and headed into the woods. Urban sounds faded. We were quickly enveloped by the stillness that isn’t silence of the forest. Water dripped from branches onto wide devil’s club leaves. Wind whispered through birches. Squirrels shrieked and chattered. Our footfalls, initially silent as we meandered down moss-covered paths, echoed when we started bushwhacking through twig-strewn hillsides. When we held still, bird songs from every direction filled our ears. 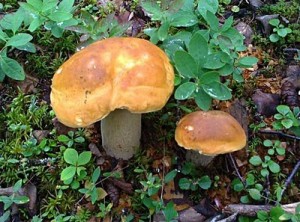 It’s a banner year for mushrooms. The rain and overcast summer skies that have inspired Anchorage residents to complain loudly and longly (and set a soggy record) are precisely the conditions in which mushrooms thrive. They arrived early and in spades. We collected thirty pounds last weekend and only stopped gathering to give ourselves time to process our collection.

Last week’s mushrooms are dried, cooked, and frozen. Fresh boletes are popping up all around the house. It’s time to head out again. 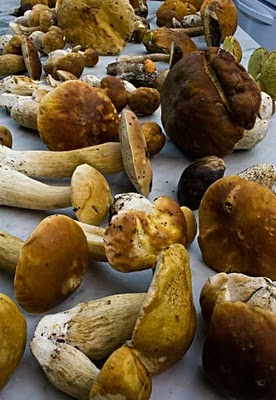 The first and most important rule for mushroom foragers is: “When in doubt, throw it out.” Do not gather mushrooms that you can’t absolutely, positively identify. Leave all unknown or questioned mushrooms alone, even if it means walking past many mushrooms of every color and shape before finding one you recognize. 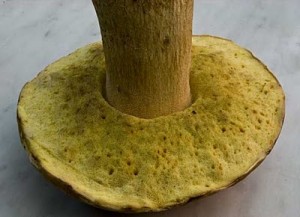 Boletes, including all the Boletus and Leccinum species, have pores rather than gills

1. The best way to learn about mushrooms is to have someone show you the edible species; spending time studying field guides also helps. The perfect field guide for Alaska doesn’t exist.

The books I like best are David Arora’s Mushrooms Demystified and All That the Rain Promises and More: A Hip Pocket Guide to Western Mushrooms. I also like The New Savory Wild Mushroom by Margaret McKenny and Daniel E. Stuntz. Alaska’s Mushrooms: A Practical Guide by Harriette Parker is good, but very limited in scope.

I made a decision a long time ago to stay away from most gilled mushrooms. The differences between edible gilled mushrooms and those that are poisonous can be very subtle. Mushrooms without gills – morels, puffballs, hedgehogs, and boletes – are much easier to identify than gilled mushrooms, and far less likely to be confused with dangerous lookalikes.

2. Search for young firm mushrooms. Their flesh is dense and delicious. More importantly, insects, worms and other competitors are less likely to have reached them. 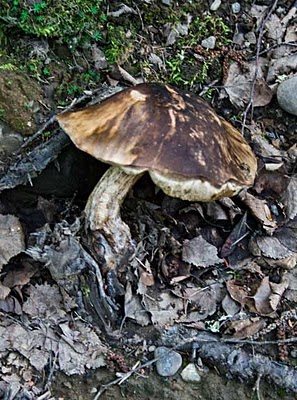 3. Look very carefully before picking the biggest and most impressive mushrooms to catch your eye. The longer a mushroom is above ground, the more likely it is to be so infested with worms and insects that it’s unsuitable for human food. Be sure, however, to look around the area where you find rotten or infested big mushrooms as you will often spot younger, less developed fruit of the same variety emerging.

4. Gather the entire mushroom, base and all, using your fingers to dig down around the stem and gently free it from the underground mycelium. Especially when gathering boletes, do not cut the stem with a knife. If you cut the stem, leaving part of it in the ground, the thick fleshy stump can rot and kill the mycelium. (Think of mushrooms as apples and the mycelium as the tree; if you kill the mycelium/tree, you won’t get any more mushrooms/fruit in future years.) Fill in the hole left by removing the mushroom with dirt, moss, or leaf mold.

5. Immediately after harvesting a mushroom and before you put it in the basket, use the knife to trim the dirty stem end and any damaged areas. Don’t put mushrooms with loose clumps of dirt in your basket. If you do, dirt from the upper layer of mushrooms gets all over the lower layers, making them harder to clean when you get home. Likewise, if you see worms or other insects in the mushrooms, cut them out immediately; the longer they’re in the mushrooms, the more of your dinner they’ll eat.

6. Wild mushrooms should never be washed in water. Use a soft brush to remove as much dirt as you can from the caps and a damp paper towel to wipe the cap clean.

7. Cut mushrooms in half and inspect for worms or other insects; remove as necessary. Don’t worry about a few worm holes; it’s the worms themselves you want to eliminate. If the pores beneath the cap are soft or soggy, remove them. 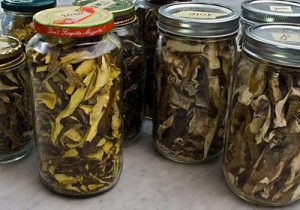 How to Dry Wild Mushrooms

In Anchorage, the best way to dry wild mushrooms is in a dehydrator (in other climates, you may be able to air dry them). Clean the mushrooms well and slice them 1/4” thick. If you slice them thinner, the slices stick to dehydrator trays and are impossible to turn.

When the slices are completely dry, let them cool and pack in glass jars with airtight lids. If even a few slices are still damp they can cause an entire jar of dried mushrooms to spoil, so be certain the mushrooms are dry.

It takes at least six months for dried boletes to develop their full flavor. The longer you store them, the better they taste.