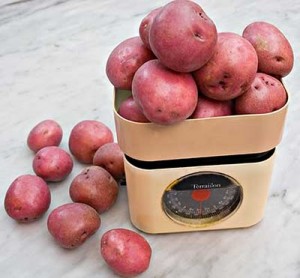 This morning it was icy cold, and we had a mountain of bottles, paper, and cans to unload at the outdoor recycling center. Before heading outside, I wanted a fortifying lunch. Potatoes cooked in tomato-onion sauce, lightly scented with cinnamon, fit the bill perfectly.

Vegetables Yiachni are often made during Greek Orthodox fasting periods, when many Orthodox Christians exclude meat (and dairy) from their diets. Since Orthodox fasting days comprise nearly half the year’s calendar, Yiachni appears frequently on dinner tables of the devout. For those who don’t fast, adding small pieces of meat or bones to the tomato sauce enhances Yiachni’s flavor.

Today’s version of Yiachni is made with potatoes, a food indigenous to South America. When the Conquistadores first brought potatoes back to Europe in the 16th century, Greece was an Ottoman backwater. According to an oft-told story, perhaps apocryphal, Greeks were not introduced to potatoes until the 19th century.

Yiannis Kapodistrias was the first president of Greece after it gained independence from the Ottoman Turks. The story tells that Kapodistrias brought a shipment of potatoes to Greece as a cheap food source. Greek farmers, a conservative and suspicious lot, showed no interest in planting this strange-looking, untried vegetable.

Kapodistrias responded to the disinterest by steeply raising the price of potatoes and placing them under guard, leading his countrymen to believe potatoes were a precious commodity. Kapodistrias instructed the guards to look the other way if anyone tried to steal the potatoes. Many were stolen and planted, and potatoes soon spread throughout Greece.

However potatoes ended up in Greece, Yiachni is a tasty way to cook them.

Previous Post: Cooking from the Pantry: Canned Beans and Tuna