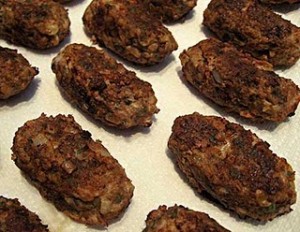 Greek holiday tables are spread with more food than is possible for assembled family members to eat. Every square inch of table is covered with food-laden plates and bowls.

Salads, spreads, cheeses, olives, savory filo-wrapped pastries, meatballs, pilafs, potatoes, and braised vegetables all make an appearance. The Greek holiday table is a feast for the eyes as well as the mouth.

Typically, Greeks do not pass loaded platters of food from person to person as is done in America. Instead, delicacies are strategically placed around the table on small serving plates. Each section of the table has its own plate of cheese, a plate of spinach pies, a plate of meatballs, and a plate of everything else the hostess is serving, in easy reach. No one misses out on anything.

If a rare dish must be passed around the table, this is done by the hostess. She walks from person to person with a platter, piling guests’ plates with too-large servings and ignoring those who protest they only want a little taste or none at all.

Meat appears, but is not the center of the meal, nor is it presented as one glorious roast. Christmas pork or turkey is carved in the kitchen and heaped on plates scattered across the length of the table.

I’m happiest when seated near a plate of garlicky meatballs, which diners spear off the serving dish with their forks. Sometimes the meatballs are round and fried (keftedes), and occasionally they’re shaped into oblong sausages, seasoned with cumin, and served in winy tomato sauce. These sausages are called Soutzoukakia, and are one of my favorite dishes.

Greeks settled Smyrna (now the Turkish city of Izmir) in the 11th century BCE. Smyrna remained important to Greece for over 3000 years, even though its government was controlled at various points by Greeks, Persians, Romans, Byzantines, and Ottomans. From is settlement until 1923, Smyrna was largely Greek.

Following the 1923 Treaty of Lausanne, the entire Greek population was ejected from Smyrna and forced to seek refuge in new countries. Most went to Greece. The displaced Smyrna residents brought their customs and cuisine with them to their new homes. Soutzoukakia is one of the dishes that originated in Smyrna, and remains a popular menu item in Greek homes and tavernas today.

I started ordering Soutzoukakia (soo-tsoo-KAH-kyah) whenever I could, initially because I liked the way the word exploded out of my mouth and later because I was hooked on the taste. After years of eating it, I consider myself a Soutzoukakia connoisseur.

I’ve had Soutzoukakia made with ground beef, lamb, and pork, or a combination of two of these meats. I’ve had it moist and tender, but also dry as dust. I’ve had it seasoned to perfection, and I’ve had it so bland that even a Peoria grandmother would eat it without complaint. It’s been served by itself, with rice, or with fried potatoes.

My recipe is informed by all the servings of Soutzoukakia I’ve consumed over the years, and attempts to avoid the many Soutzoukakia pitfalls I’ve experienced. Having now made the recipe countless times, these Soutzoukakia are consistently juicy, full of flavor, and always delicious.

Next Post: Gold Out of Straw: A Kitchen Disaster that Wasn't