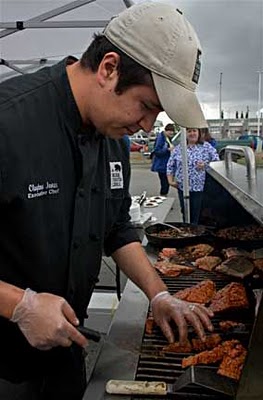 During the June cook-off, I watched tasters finish their portions and immediately get back in line for seconds and thirds. It wasn’t a surprise when Chef Clayton won.

For those who want to try the winning recipe at home, Chef Clayton graciously gave me his recipe. Unfortunately, it called for almost 2 pounds of dried chiles and 1 pound of salt, yielding 1 gallon of sauce. (Mind you, this was a “reduced” recipe; at Bear Tooth, Chef Clayton makes 16 gallons of sauce at a time.) It also uses techniques, like deep-frying dried chiles at a precisely-maintained temperature, better suited to restaurant kitchens.

To modify Chef Clayton’s recipe for home use, I turned for advice to my brother and sister-in-law, whose family lived in New Mexico and cooked chiles long before the region became part of the United States. Using the Corona family’s time-tested techniques for oven-toasting, rehydrating, and pureeing chiles, and Chef Clayton’s ingredients and proportions, I succeeded in developing a simple recipe for making Bear Tooth Grill’s “Recado” Chile Sauce at home. 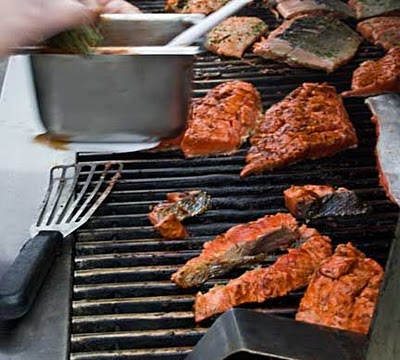 Even my reduced recipe makes two healthy cups of sauce, though only 3 tablespoons are necessary to glaze salmon for four. Trust me, this isn’t a problem; extra sauce is a desirable bonus.

At Bear Tooth Grill, a swipe of chile sauce is the finishing touch on dishes like blackened chicken and blackened halibut. Chef Clayton also recommends putting it on bacon cheeseburgers, in chilaquiles, or mixing it with ranch dressing for some wonderful “where does that come from flavor.”

My brother suggests using chile sauce to top fried eggs on tortillas, cooking bite-sized chunks of beef in chile sauce with beans on the side, or adding the sauce to braising liquid for short ribs. He also said, “the Coronas put a bowl of [their version of] chile on the table to use as a condiment – it adds flavor to anything – burgers, potatoes, corn, anything.”

The sauce also freezes well. To freeze, put no more than one cup sauce in a quart-sized zip lock bag, suck out any air, seal the bag, and press sauce into a flat, even layer. With a thin layer of sauce, you can break off only the amount needed for a recipe, leaving the rest frozen in the bag. With sauce ready in the freezer, this recipe goes together quickly.

One note about the name: recado typically refers to achiote spice paste. Chef Clayton said Bear Tooth Grill’s “recado” recipe has evolved over time and the name is a remnant of the past. He couldn’t consistently get good quality achiote in Alaska, so stopped using it. “Recado” is now a “house name” used by Bear Tooth Grill for this particular sauce, rather than a reference to the classic Mexican spice paste.

Next Post: How to Gather and Use Alaska's Wild Mushrooms