Leftovers: I Love Them, You Should Too; or Don’t Throw Away Your Pie Dough

Some time ago we went to a friend’s house for a wonderful, well-cooked meal. I helped her clean up afterwards, and asked where she kept her storage containers so I could stick the leftovers in the refrigerator. She laughed, and said, “Just throw it in the garbage; I don’t bother saving leftovers.”

Throw it in the garbage? Throw away perfectly good food, all of which has excellent flavor, that she had spent hours preparing? I asked her why she was throwing it away. She said no one in her house liked eating the same thing over again, and they all wanted freshly prepared food each day.

I didn’t argue, but I also didn’t understand. Wasting perfectly good food bothers me. I can still hear my mother admonishing me about “starving Armenians” whenever I take my eye off the ball and let food turn green in the refrigerator.

A moment’s digression: As far as I know, there were no Armenians in the small Pacific Northwest town where I grew up. The Armenian genocide occurred between 1915 and 1918. Why, then, is the phrase “starving Armenians” so firmly fixed in my mind? I called my parents to ask. The answer is their parents chided them regularly to not waste food because the “poor starving Armenians” would really appreciate it. When raising us, a reminder about “starving Armenians” was the talismanic way my parents ensured we would remain members in good standing of the “clean plate club.” 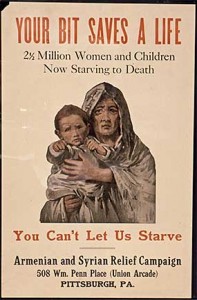 But where did the phrase come from? In the decade after World War I, the American people raised millions of dollars to assist Armenian genocide survivors. Relief organizations used the image of “starving Armenians” to help raise money (at that time, many Armenians were, indeed, starving). Adults reminded schoolchildren across the country, including my father in the Northwest and my mother in the Midwest, of the Armenians’ plight, particularly around mealtimes. My Dad said it wasn’t until he was an adult that he knew who the Armenians were; as a child he just knew they were starving and really liked spinach. (As in, “Boy, eat your spinach. The ‘starving Armenians’ would feel lucky to have it.”)

Back to my leftover-tossing friend: She had worked hard to develop delectable flavors in the dishes she served us. Putting these flavors in the garbage along with the leftovers meant she couldn’t use them to heighten and improve the food she would be making over the coming week.

When we have leftovers, I think of them as complex ingredients that can be used to create new dishes, rather than as reheated dinners we have to slog through because people somewhere in the world are starving. By using leftovers as ingredients, I often hit on flavor combinations so desirable they become dishes I make for their own sake.

For example, there’s a recipe in Tastes Like Home: Mediterranean Cooking in Alaska for a Palestinian Chicken and Onion dish called Masakhan. I used its leftovers to make chicken soup bursting with Middle Eastern flavors. It is now a favorite winter meal I make starting from scratch. Had I not saved and used the leftovers from Masakhan, I never would have discovered this complex and exotic soup. 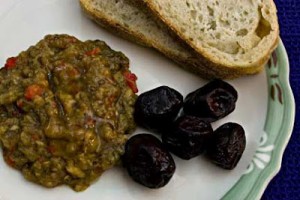 Last night I decided to use two stuffed eggplants left over from the Imam Baildi we had last week. The flavors I had to work with were well-cooked eggplant with onions, parsley, and tomatoes. I thought about using the mixture as a filling for filo pastry, or for soup, or as the basis for a sauce, but decided I was in the mood for Melitzanosalata, the eggplant spread Greeks call Eggplant Salad.

Putting tomatoes and onions in Eggplant Salad may not be the most traditional way Greeks make the dish, but this combination of ingredients is commonly used in spreads and salads throughout the Balkans and Middle East. With a few minor adjustments, my leftover Imam became a new plate of Eggplant Salad that in turn became part of a lovely pre-dinner appetizer spread.

Once you start regularly using leftovers as an ingredient, it becomes easier and easier. Soup is always a good destination for leftovers, but be sure only to use ingredients with complimentary flavors. My grandmother would dump all the leftovers she had into the same soup pot whether or not their flavors went together. This is not a good idea.

Leftover meat works well in salads, or combined with rice, or incorporated into a pasta sauce. It can be used in fillings for stuffed vegetables or added to braised vegetables as flavoring. Hot sandwiches are another choice way to use leftover meat.

My mother is fond of making pot pies with her leftovers. She buys little aluminum pie pans, lines them with the dough she has leftover from making pies, and freezes the pie crusts for future use. When she has leftover meat and vegetables, my mother grabs the frozen pie crusts and puts together an effortless pie for dinner.

After my mother explained her clever pot pie techniques, she asked if I ever had leftover pie dough. Yes, indeed I have, but I always just throw it away, I said. This was the wrong answer. Using her best “Mother voice” she said, “Don’t throw leftover pie dough away; that is bad, bad, bad form. Even if you don’t want to freeze pie crusts, you should roll out the extra dough, sprinkle it with cinnamon and sugar, and bake it in the oven, which is already hot. It’s really good and you can eat it when your husband’s gone.” Okay, I said, okay. “Tell your readers not to throw food away. And tell them not to waste their pie dough.”

3 Responses to Leftovers: I Love Them, You Should Too; or Don’t Throw Away Your Pie Dough