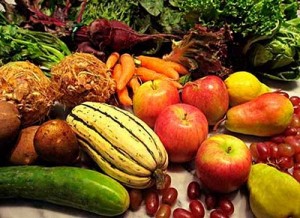 A reader asked about Full Circle Farm (FCF), one of my sources for vegetables. The reader wondered why I buy produce from FCF since I’m in Alaska and FCF is in Washington. This picture of produce from a FCF delivery may help explain, but doesn’t directly answer my reader’s question, so here goes:

FCF is an organic farm in Carnation, Washington that provides weekly boxes of organic fruit and vegetables to subscribers of its Community Supported Agriculture (CSA) program.

While I’d prefer to eat locally and seasonally, this is an impossibility in Alaska for much of the year if I want to include a full range of fruits and vegetables in my diet. By October, everything in our garden has been harvested. Shortly after harvest, the snow falls and stays on the ground until at least April. The farmers’ markets end for the year in October.

Local grocery stores carry a full complement of fruits and vegetables, just not in the organic section. In the last few years, a number of Alaska stores have increased the size of their organic produce sections. Even with more room, however, the organic selection is limited to a few varieties of produce that tend to remain the same from week to week. All too often the organic vegetables are wilted and of poor quality.

Local grocery stores were not meeting my need for organic produce, so I turned to Full Circle Farm for relief. Judging from the growing number of locations where FCF produce boxes can be collected, many other Alaskans share my experience. There are now many pickup locations in Anchorage and Eagle River, and 46 in the rest of the state, including Bethel, Kotzebue, and Dillingham. [2011 Update: In some Alaska locations, FCF does home deliveries.]

FCF gives subscribers the option of receiving small, medium, or large boxes, weekly or biweekly, depending on each subscriber’s preference. I get a small box of produce every other week, at a price of $37 per box. That’s plenty for the two of us; by the time it’s new box day, we’ve pretty much eaten everything and are ready for more. [2011 Update: The sizes and prices of FCF boxes have changed; deliveries are now made only weekly.]

I buy produce from FCF because it provides tasty fruit and vegetables for a fair price, and in so doing, has simplified my life.

Previous Post: Leftovers: I Love Them, You Should Too; or Don't Throw Away Your Pie Dough