On Tuesday, November 20, Anchorage’s Fourth Avenue stars in Chuck’s Eat the Street on The Cooking Channel. Here’s a behind the scenes look at why the show came to Alaska and what Chuck Hughes, the show’s host, thinks about Anchorage. 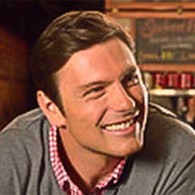 On film, Chuck is boyish and light-hearted. His food tattoos, including a piece of lemon meringue pie tattooed on his elbow, are legendary. In conversation, Chuck is infectiously enthusiastic. He radiates joy and happiness when he talks about food, his life, and travels.

Chuck wanted to visit Alaska for years. He’d tried to come for an earlier show called Chuck’s Week Off: “The network people asked where I wanted to go. I immediately said Alaska. All I could think about was fresh halibut and crab. I love seafood,” said Chuck. “Everyone in the meeting looked at me like, ‘really?’ They thought I was joking. I wasn’t. We ended up filming Chuck’s Week Off in Mexico, but I never lost the desire to visit Alaska.”

Chuck couldn’t say enough nice things about the state: “I’ve seen a lot of amazing things since I started doing television, but rugged, untouched, beautiful Alaska is my favorite. Everyone I met in Alaska was super interesting, happy-go-lucky, adventurous, and had amazing stories. I didn’t meet anyone I wasn’t impressed and inspired by. It was eye-opening to meet so many quirky, interesting people all in one place.”

Asked if Alaska surprised him, Chuck said, “I didn’t think Anchorage would be such a big city with malls and giant stores. I was shocked that it was a city-city. I also wasn’t expecting mountains and so many trees. I thought it would be flat, no trees, and snow. I was surprised it wasn’t cold. Some days were sunny and some days it rained, but it was never all that cold.” 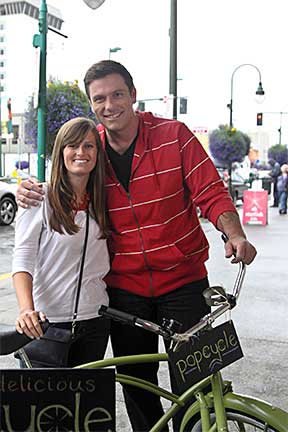 Chuck Hughes, Kait Reiley, and the PopCycle, photo courtesy of The Cooking Channel

The Anchorage episode of Chuck’s Eat the Street features Fourth Avenue. Chuck eats pelmeni, traditional Russian dumplings, at Nane’s Pelmenis and reindeer sausage at Flo’s reindeer sausage cart. He cooks salmon at the Crow’s Nest and finishes with a sweet rhubarb and strawberry popsicle from PopCycle, Kait Reiley’s vintage bike with a cooler in the side car.

Chuck loved PopCycle, “There was a cute girl on a bike selling creative popsicles. Her business is very cool. Everything she sells uses good ingredients and is very well made. Kait was so passionate and positive about what she was doing. I was impressed by her and all the Alaskans who are creating these amazing little businesses.”

Kait enjoyed being featured on Eat the Street, “It was fun even though it was cold that day. It was the first time I took Millie, that’s what I call my bike, out in the rain. Chuck was really nice; taller than I thought he’d be. He was jovial and gentle. You’d never know he’s had 3 or 4 cooking shows. He was just an easy-going person, not pretentious in any way. He has tons of food knowledge that he shares easily.”

Chuck said a producer who came and scouted Alaska picked most locations featured on the show. Eating reindeer sausage, however, wasn’t planned. Chuck saw Flo’s reindeer sausage cart on the street and had to have it. “Reindeer sausage is definitely unique. It was amazing; I really liked it. Trying it made the episode,” said Chuck.

Chuck’s favorite memory from Alaska is of two days he spent hanging out with Stan Selman from Club Paris. Since it’s on Fifth Avenue, Club Paris couldn’t be on the show, but Chuck loved everything about Selman’s restaurant: “At places like Club Paris, you can see history.”

“It’s very rare I meet guys who fish and hunt for their dinners. With Stan, I finally met a real man,” said Chuck. “It was hilarious. He took me salmon fishing. I kept hearing that everyone catches salmon in Alaska. Except me. That’s how life works; you can’t always catch a fish. I’m no different than anyone else. But I was out on the water in Alaska surrounded by water and mountains. It was a wonderful day. And I still got to eat fresh Alaska salmon.”

Stan filled in the details: “Chuck’s producer wanted us to go fishing at Bird Creek, which was way too muddy for camera gear. We went to Glacier Creek instead and Chuck drove down with me. He’s a great guy. We have a lot in common, including a love for ink.”

At Glacier Creek, Stan hooked a silver and handed Chuck the pole to bring it in. “What with the crew wanting to film him fighting the fish, he ended up losing it,” said Stan. They continued to fish without luck until it was time for Chuck to get back to town. Stan wasn’t ready to give up: “The crew had filled up my tank with gas and no way was I going back without fish. I loaded up my gear and went down to the Russian River. Somehow, amid the dying, rotting, and stinky reds, I hooked two shiny silvers.” Fish in hand, Stan returned to Anchorage and cooked fresh salmon for Chuck and crew. 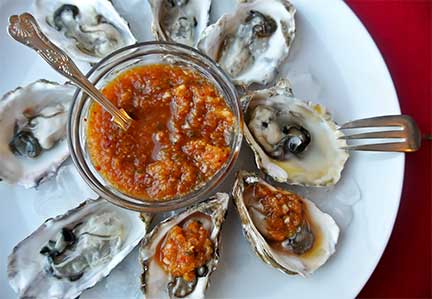 Oysters on the Half Shell with Napa Cabbage and Cucumber Kimchi, photo by Kim Sunee

Chuck is a long-time oyster aficionado and sports an oyster-themed tattoo. He tried oysters at the Alaska State Fair and at the Bubbly Mermaid Oyster Bar on D Street. Chuck’s conclusion: “Alaska oysters are phenomenal.”

Chuck loves eating oysters with Napa Cabbage and Cucumber Kimchi, a pickled Korean dish seasoned with red pepper paste.  “I love kimchi; I really, really enjoy it. It’s always a great combo with briny fresh seafood. There are several different ways to combine kimchi and oysters. The first way is to shuck oysters, mix them with kimchi, and vacuum pack the two together for a week. They’re amazing. I like serving salty fried oysters with kimchi on the side. For oysters on the half shell, I grind up kimchi and use that instead of cocktail sauce.”