Anatomy of a Recipe (with Recipe for Savory Fish Cakes / Ψαροκεφτέδες)

Before I wrote Tastes Like Home: Mediterranean Cooking in Alaska, I rarely wrote down recipes, though I occasionally made a few notes about what I’d prepared. If I ever went back to the notes, and I rarely did, they were incomprensible, full of half sentences and incomplete thoughts. I could sometimes read my handwriting, but too often the content was less than clear.

“Butter, golf” read one such note. “4 dill” read another. “Don’t table.” Don’t table? The mysterious scribblings meant nothing to me.

When I began work on Tastes Like Home, I knew I had to do better, to write more clearly, to be more precise. As I tested and created recipes for the book, I typed up details of that day’s effort as soon as dinner was over. I thought I was being disciplined. I thought I was writing recipes. I thought what I’d written would make it simple to put the book together.

I was wrong; very wrong. When I went to organize the book that became Tastes Like Home, I discovered my dutifully typed writings were merely more refined versions of handwritten notes, albeit slightly more intelligible. To go in a book, everything needed to be completely rewritten, and then rewritten again.

Doing a project the size of Tastes Like Home taught me many things, among them the need to write complete and finished recipes contemporaneous with cooking a dish. I promised to reform my ways and write finished, complete recipes in small bites, day by day, as soon as food left the kitchen.

Occasionally I keep that promise.

So what goes into writing a recipe? 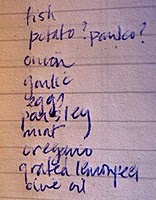 Once inspiration strikes, I start planning the recipe. I think through the components that make up the particular flavor I’m after. What ingredient is the focus of the dish? What are the high notes, or the subtle background flavors? As I think these things through, I may make a list of ingredients most likey to create the taste experience I’m after.

At this point, I enter the kitchen and start cooking, but a kind of cooking that is unlike my normal style. Normally, I don’t measure ingredients. Normally, if I taste what I’m making and add something to give the dish a flavor boost, I won’t remember a day later what exactly I added. I’ll remember being happy with how my dish tasted, but recreating it would be impossible.

In contrast to my normal free-form style, when I intend to share a recipe with others, I measure everything, a task that requires a high degree of discipline (not my strong suit). I frequently stop myself mid-air as I’m about to add an ingredient, having realized it has not yet been weighed or measured. I add flavorings in smaller increments than normal, so I can find the exact point at which a recipe has enough, but not too much, of a particular flavoring.

And most importantly, I write down everything while I’m cooking. At least I try to do this, I really try. Sometimes I succeed. But not always, so my back-up strategy is to write the recipe in finished form within hours after I have finished cooking. At this stage, I remember exactly how I prepared the dish, and what went into it, and in what order.

If I don’t take notes while I’m cooking and don’t finalize a recipe the same day I cooked it, I make the dish again before I put its recipe in writing. I want to make sure I didn’t leave anything out, so that anyone who uses the recipe will enjoy its flavors, just as I did when I originally decided it was worth passing on to others.

A couple days ago, I finalized a recipe for Savory Fish Cakes, called Psarokeftedes in Greek. I once enjoyed this dish in a seaside taverna in Greece, and wanted to make it using ingredients available in Alaska. The day before I made the fish cakes, we had fresh halibut for dinner; the leftovers were perfect for fish cakes. (Note: The Alaska halibut season closes tomorrow — 11/15 — at noon, so there is no time like the present to buy halibut.)

The Savory Fish Cake recipe turned out well. My husband pronounced them the best he’d ever had (and he is not shy about telling me when a dish could be better or that he never wants to eat it again). My friend Teeny had been over to take pictures of me cooking and I gave her some raw fish cakes to cook at home; both her and her husband pronounced them excellent. I loved them and ate too many.

Having succeeded in achieving the taste I wanted, I only had to write down the recipe, which I did immediately. My work is done. The recipe is complete and final and ready to be made again, in your kitchen and mine.

Previous Post: How to Prep Celery Roots and Roast Beets

Next Post: Seafood Restaurant in the Heart of Athens: Logia tis Ploris