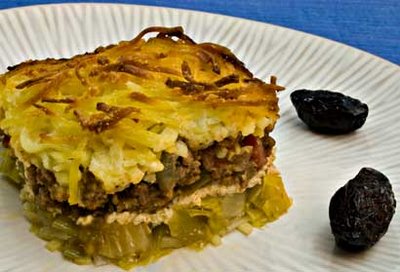 Leek Mousaka can be made for vegetarians by using my recipe for Tomato Sauce with Celery and Mint (and simmering it until it’s thick) instead of the meat sauce described below. Although Leek Mousaka has many steps, it goes together quickly once the component parts are done. The meat sauce may be made days ahead (or months ahead if you freeze it). The yogurt may also be made well ahead (or purchased, if strained Greek yogurt is available where you live). Because I prefer strained yogurt for all purposes, I usually strain yogurt right after I bring it home from the market so it’s ready when I want it. Leeks can hold dirt between their layers, so must be carefully cleaned. After removing the dark green portions and the root ends (both of which can be saved for vegetable stock), cut the leeks in half. Under running water, rinse out any dirt trapped between the leeks’ layers, using your fingers to help remove any stubborn clumps of dirt. Every layer of Leek Mousaka is separately salted (doing so brings out the full flavor of each ingredient), so be careful not to over-salt any one layer or the finished dish will be too salty. 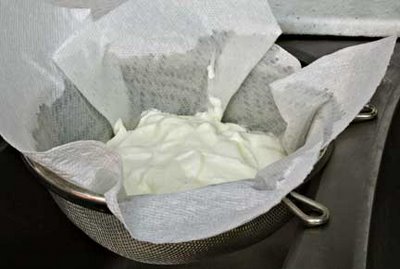 Make the Yogurt Filling: Line a strainer with a paper towel and dump in the yogurt. Let the yogurt drain for at least 1 hour (straining for 2 hours is better if you have time). Purée garlic by mashing it into the salt with the flat of a knife or in a mortar and pestle. Mix the puréed garlic into the strained yogurt.

Make the Meat and Tomato Sauce with Celery and Mint: Sauté the ground meat, lightly seasoned with salt and freshly ground pepper, until it is nicely browned. Add the diced onions and celery and sauté until the onions begin to brown. Stir in the garlic and Aleppo pepper and cook for 1 minute. Stir in the crushed tomatoes and white wine and bring to a boil. Cook rapidly for five minutes, stirring constantly. Turn the heat down to medium, and simmer for 15 – 20 minutes or until most of the liquid in the sauce has evaporated. Taste and add salt and freshly ground black pepper, as needed. Stir in the mint and take the sauce off the burner.

Cook the Noodles: Add the noodles to boiling salted water and cook until they’re half done. (Because the noodles are small, they cook quickly.) Drain and set aside.

Make the Leeks: Sauté the diced leeks in olive oil, lightly seasoned with salt and freshly ground black pepper, until the leeks are soft.

Make the Topping: Whisk together the eggs, cream, a little salt, freshly ground black pepper, and 1/3 cup of grated cheese.

Assemble the Mousaka: Preheat the oven to 400°F.

Bake for 50 to 55 minutes. Let cool for at least 10 minutes before cutting into pieces with a very sharp or serrated knife.