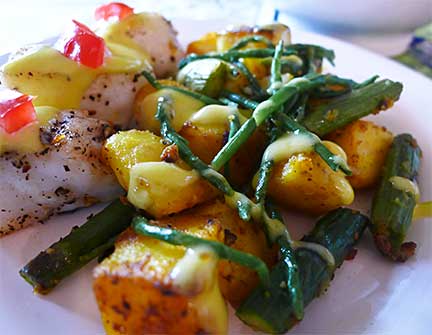 Adapted from Ottolenghi: The Cookbook by Yotam Ottolenghi and Sami Tamimi (Ebury Press 2008)

In the original recipe, British restaurateurs and partners Ottolenghi and Tamimi pair salty sea beans with saffron-scented potatoes, earthy asparagus, sweet scallops, and roasted garlic aioli. I used gorgeous, über-fresh Alaska halibut instead of scallops, decided roasting garlic was unnecessary, doubled the sea beans, and threw in Aleppo pepper because it tastes good. I used golden extra virgin olive oil. It colored the aioli to match saffron potatoes. Its flavor was peppery, tempered by the lush richness of olive oil. For milder aioli, use 1/4 cup olive oil and 1/3 cup canola oil. With two pots cooking at the same time, followed by two frying pans sizzling together, this dish goes together quickly, despite its several components. Sea Beans, Asparagus & Saffron Potatoes may be served as a side dish for any meal (without the halibut, of course).

Prep Fish: Season chunks of halibut with salt and freshly ground black pepper on both sides. Set aside while preparing the aioli and vegetables.

Prep Vegetables: Bring two pots of water to a boil, one pot with salt and saffron added; the other pot with plain water. Add potatoes to saffron water and cook until done but still slightly firm, about 10-15 minutes. Drain and reserve.

While potatoes are cooking, add sea beans to boiling pot of plain water. Cook for 30 seconds and remove sea beans to bowl of ice water. When sea beans are cool, remove from water and reserve.

[Tested by Laurie Constantino in her test kitchen]