Thursday, May 22, 2008
Total time: 30 min
Related article: How to Harvest and Use Fireweed Shoots 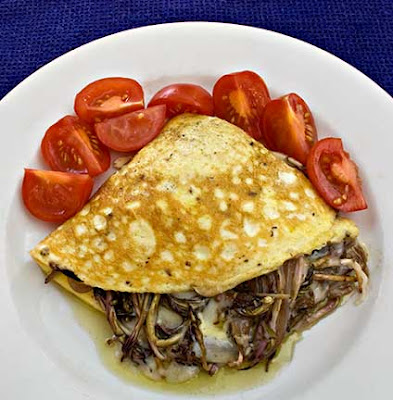 Fresh eggs, rich cheese, and slightly bitter fireweed shoots make such a deliciously special omelet that we usually have it for dinner instead of breakfast. For 2 people, I prefer making 1 omelet in a large pan and cutting it in half, but you can also make 2 individual omelets in a smaller pan. To clean fireweed shoots, trim off any browned or damaged bits, and cut into 1” lengths. Taste, and if the fireweed shoots are bitter, blanch them in boiling, salted water before starting recipe.

Make Filling: Sauté onions, lightly seasoned with salt and freshly ground black pepper, in olive oil until they soften and start to turn golden. Add fireweed shoots and stir until they’re thoroughly coated with oil. Add 1/2 cup water, bring to a boil, and cook until all the water has evaporated. Keep warm while you make the omelet.

Make the Omelet: Whisk together eggs, cream, hot sauce, salt, and freshly ground black pepper. Melt butter in cast iron skillet (or other pan suitable for cooking omelets). Pour in egg mixture, cover pan, turn heat down to low, and cook until eggs are nearly, but not quite, set; the omelet’s top should still be moist. Sprinkle fontina over half the omelet. Cover and cook until eggs are set, about 1 minute.

Put cooked fireweed shoots on top of omelet’s cheese half and sprinkle with grated parmesan. Flip the plain half of the omelet over the fireweed shoots. Cut omelet in half and serve immediately with a simple salad of salted tomatoes.