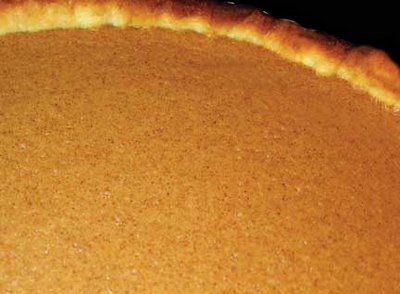 The texture of Cinnamon-Honey Tart filling is similar to pumpkin pie filling, and is better when made with whole-milk ricotta. In Greece, fresh, unsalted myzithra is used instead of ricotta, but this product isn’t available in Alaska. The myzithra sold in most US supermarkets is dried, salted, and not suitable for a sweet tart filling.

I like making Cinnamon-Honey Tart in an 11” tart pan with a removable bottom to increase the crust to filling ratio. Use a 9” springform cake pan if you prefer cheesecake to tarts (more filling, less crust), a 9”x13” pan if you want to serve the dessert as bar cookies (great for potlucks), or pastry-lined cupcake tins or tartlet pans to make individual-size servings. In developing the recipe, I baked various versions of the filling as custards (without the crust) in a water bath at 325°F for 30 minutes. The custards are tasty, dead simple to make, and may be made ahead (the flavor develops over time).

Dump the dough onto a sheet of plastic wrap, and knead lightly to form a flat disk. Wrap and let rest for at least 30 minutes before using.

Roll out the dough into a round with a diameter 3” wider than the tart pan (or enough to cover the bottom and 1” of a 9” springform pan’s sides). Use the rolling pin to lift the dough and place it in the pan; press the dough firmly into pan’s sides and bottom. Trim the dough’s edges so there is just enough to fold under and cover the sides of the tart pan with a double layer of dough (if using a springform pan, trim the dough so it goes 1” up the sides. Prick tiny holes all over the crust with a fork.

Press a double layer of aluminum foil directly onto the dough-covered bottom and sides. Bake the crust for 15 minutes. Remove the foil and bake for 5 minutes or until the crust is set and lightly golden. Remove from oven and place on a cooling rack. Reduce the oven heat to 375°F.

Make and Bake the Filling: Mix all the ingredients together to form a smooth batter. Pour the batter into the pre-baked pie crust. Bake for 20 – 25 minutes, or until the sides of the tart are set and the middle is still a little jiggly; residual heat will finish cooking the filling (because the springform pan is deeper, the filling in it will take a little longer to cook). Overcooking Cinnamon-Honey tart causes the filling to crack.