I was a “difficult” kid. Nothing was easy; conflict with parents and teachers a constant.  It was different when I was with my grandmother, after whom I was named. She loved me, reassured me, and made me feel special. I adored her.

My grandparents lived a three-hour drive  from my childhood home. We always spent major holidays together. Easter and Thanksgiving were at the grandparents; Christmas was at our house.

For me, every holiday had an important marker signalling its official start. On Easter, it was my grandmother warbling The Old Rugged Cross in church. Thanksgiving was the parade; either Macy’s on TV or the Meier & Frank Thanksgiving Parade live in Portland. Christmas started when my grandmother brought out her date-nut roll, a tricky-to-make candy. Some years, it was burnt and hard (we ate it anyhow); occasionally, it was perfectly, deliciously, chewy.

In my 20s, I went to school in Portland, a quick drive to my grandparents’ house. I visited them often. My grandmother and I went huckleberry picking on Mount St. Helens (before an erupting volcano blew off its top) or grocery shopping in Vancouver. We seeded, weeded, and harvested my grandparents’ large garden. We cooked plain, simple American fare. Afterwards, we played cards or Yahtzee. When my grandmother wasn’t looking, I’d go to the liquor store and buy my grandfather a pint of whiskey. 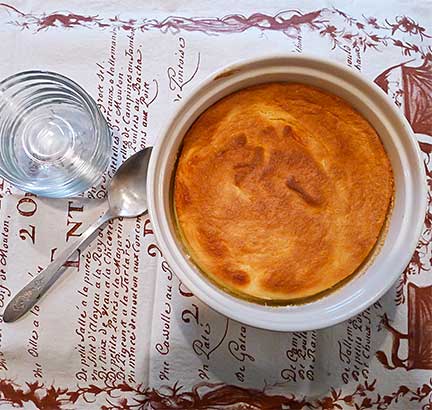 Lemon Caketop Pudding (aka Lemon Pudding Cake) was one of my grandmother’s favorite desserts. She was notorious for overcooking food, leaving it dry and difficult to eat. She liked making pudding cake and never worried about it drying out. Tart and sweet, light but filling, I loved it too. My grandmother often made it when I visited.

When my grandmother died, I inherited a few of her trinkets: a set of combs, brushes, and nail tools she kept on her dresser; her Eastern Star pins; my grandfather’s straight razor; a deck of cards; and a wooden box containing hand-written recipes, including her recipe for Lemon Caketop Pudding.

Over the years, I’ve made Lemon Caketop Pudding often; never without thinking of my grandmother. It goes together quickly and easily. Best of all, there’s something about its old-time, unpretentious hominess that inevitably puts guests in a good mood.

NewMetro Design, maker of my beloved BeaterBlade, recently introduced a trio of interesting kitchen tools in partnership with baking guru Rose Levy Berenbaum (author of  The Cake Bible, The Pie & Pastry Bible, and The Bread Bible). The tools are: ZestN’est for zesting citrus fruit and grating cheese or chocolate, JuiceLab for juicing citrus fruit, and MixerMate for beating food with a hand mixer. (How Gary Fallowes, owner of NewMetro Designs, became a cooking tool inventor is an interesting story.)

NewMetro sent me a sample of all three tools to test. All are great additions to the kitchen tool closet. To photograph the tools in use, I made my grandmother’s Lemon Caketop Pudding. 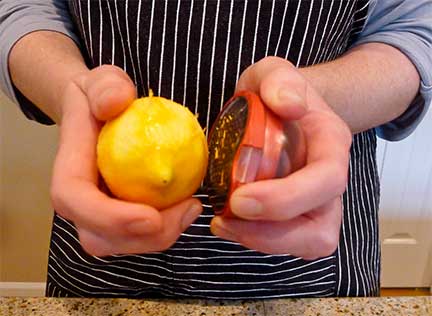 ZestN’est is handy for grating citrus peel. It shaves off flavorful zest without disturbing the bitter pith underneath. It comfortably fits in my small hands. I particularly like how grated zest is contained in the N’est’s oval container, which makes it easy to measure and use. If you grate too much zest, ZestN’est has a snap-on cover for refrigerator storage.

Normally, I zest citrus with a classic Microplane grater onto a plate or piece of parchment paper. This technique works fine but, now that I have it, I prefer ZestN’est. I like the convenience of having zest end up in a little bowl instead of scraping it off paper or a plate. I also like its shallow grater, which cuts zest into exactly the right size. It’s easy to clean and can go in the dishwasher.

I’ve used ZestN’est for grating every kind of citrus peel, for Parmigiano Reggiano cheese, and for baking chocolate. I particularly like it for chocolate which, with normal graters, has a tendency to fly around the kitchen. Grating goes quickly with ZestN’est, and I don’t grate my fingers no matter how fast I’m working.

On this point, I have one issue with ZestN’est. It can be hard to open. While opening it, I’ve nipped my fingers on the grater more than once. This happens because the place to open ZestN’est is right next to the grater’s sharp cutting edges. If it opened on the opposite end, the risk to straying fingers would disappear. 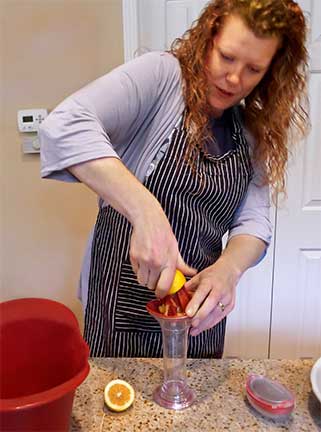 JuiceLab is made of a citrus reamer that snaps into the top of a clear plastic tube. The tube is marked off into tablespoons and easily measures the amount of juice inside. It also has a tight-fitting cap, which is convenient for storing extra juice in the refrigerator. I like JuiceLab and use it regularly.

When I first saw JuiceLab, I was nervous it would tip over, but there’s a rubber ring on its underside to prevent this from happening. The tube is narrow enough that you can grasp it with one hand and ream fruit with the other. It also has a nice spout; juice doesn’t spill when pouring from JuiceLab into another container.

I have a couple minor quibbles with JuiceLab. I wish the reamer’s ribbed cone had a sharper point at the top to make juicing firm or cold fruit easier. I’d also prefer if the drain slots were a little narrower to prevent medium-sized seeds from falling into the juice (this isn’t a problem with large seeds). Despite these minor flaws, I enjoy and recommend JuiceLab. 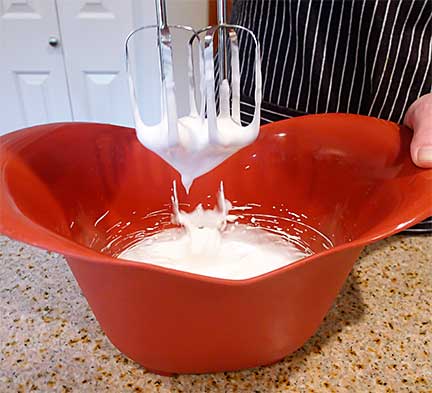 MixerMate is a fun item. It’s shaped to effectively take advantage of the oblong shape made by a hand-mixer’s two beaters. Before I used it, I was dubious about this unusually-shaped bowl. With use, I’ve discovered it’s quite handy.

MixerMate’s design is thoughtful, from the rubber-ringed  bottom that prevents the bowl from slipping and sliding, to its splatter-preventing depth, to the way it fits hand-mixer beaters. NewMetro says MixerMate’s “funnel shaped design speeds mixing by up to 30%.” I can’t verify the exact percentage, but there’s no doubt whipping food in the MixerMate is faster than when done in a round bowl.

Like its original BeaterBlade, NewMetro’s latest products work to simplify regularly performed kitchen tasks. I recommend following NewMetro on Facebook to find out about its latest products and because it often links to great recipe ideas.

Note: NewMetro gave me samples of ZestN’est, JuiceLab, and MixerMate to test and is providing the giveaway below. Neither has influenced my opinion of NewMetro’s products. I test a variety of kitchen equipment, but only write about tools I like and use regularly in my kitchen. If a tool doesn’t work or isn’t worth the money, I don’t write about it, no matter what I’m given. 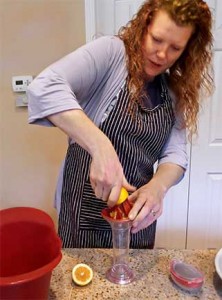