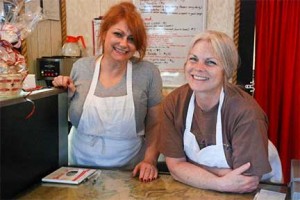 BAKING ALASKA is a documentary about two Southern sisters, Jackie and Kathy, who leave behind their ordinary lives to chase a dream of opening a bakery in Alaska. Kari Barber is the director of BAKING ALASKA. She’s finished filming, but needs additional money to complete and publicize the movie. I’m trying to help her. Kari is raising funds through Kickstarter, a website that helps artists find small investors for their projects. Even $10 donations will help Kari complete and promote BAKING ALASKA.  Laurie Constantino

My mother grew up in Moore, Oklahoma.  She was a childhood friend of sisters Jackie (Simpson) Johnson and Kathy (Simpson) Hamrick. Four years ago, my mother called and said, “You won’t believe what Jackie’s doing, she’s quitting her good job to open a bakery in Alaska!” I was so excited I couldn’t sleep that night. I knew immediately that Jackie’s story would make a great movie. As a producer, cinematographer and editor with plenty of experience working on other people’s films, I wanted to tell Jackie’s story as my directorial debut. 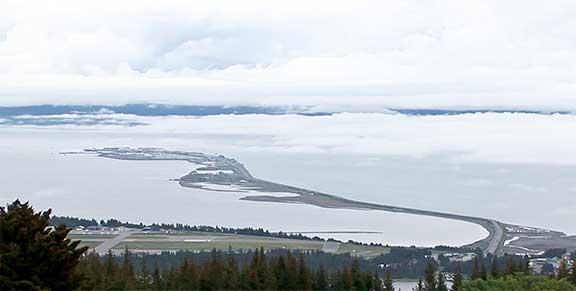 The story began in 2008 when Jackie, an Oklahoman living in Texas, was on vacation in Homer, Alaska. She stood on a hill overlooking Homer Spit and knew it was the most beautiful place she’d ever seen. Jackie, then 49 years old, was the director of an assisted living center, a stress-filled job. She wanted something more from life and dreamed of owning her own business.

Jackie drove down the Spit and looked around. There she found an opportunity: a bakery for sale. Since childhood, Jackie had loved the freedom and creativity of baking. Her first badge in Girl Scouts was the cooking badge, and she had a business making wedding cakes as a teenager. She wondered whether she could turn her hobby into a successful business. She didn’t know, but decided to take the leap. Jackie quit her job, sold her house, and bought the bakery.

Jackie couldn’t run the bakery alone, but soon got help in an unexpected way. For many years, Jackie had lived in Texas, far from her family. While she was buying the bakery, her father passed away. Jackie’s mother, Doris Simpson, and sister Kathy decided to join her in Alaska. The three women would run the bakery together, giving them all a chance to be close again. 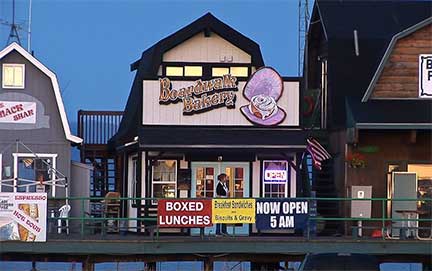 Baking Alaska starts in Oklahoma the day in 2010 that Jackie and Kathy loaded a used RV with baking supplies and set off for the long drive to Alaska. They couldn’t have known the challenges, and opportunities, that lay ahead.  Baking Alaska follows the sisters as they drive to Alaska, open Boardwalk Bakery, and reconnect as a family.

Boardwalk Bakery serves breakfasts and box lunches as well as an ever-expanding array of pastries. One huge challenge to the bakery’s success is it can only be open from May 1 to Labor Day. During winter, water is shut off to the boardwalk where the bakery is located. Boardwalk Bakery is open seven days a week. The sisters get up at three o’clock every morning, so they can open the bakery at five. It’s an exhausting marathon but, as the film shows, incredibly rewarding.

For the past three years I’ve traveled back and forth to Homer, Alaska, to film Jackie’s story. As viewers will see, it’s a story about strong women, family, adventure, risks, and second chances. 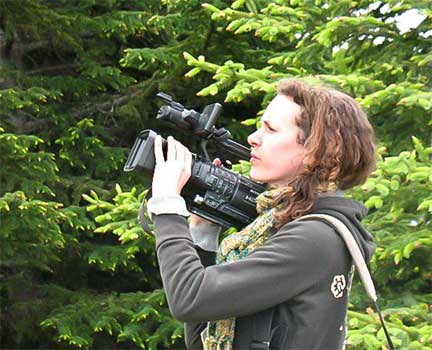 Like Jackie and her family, I’m originally an Okie from Oklahoma. I now live in Washington, D.C., finishing my master’s in film at American University. Jackie’s story came to me just after I’d moved to D.C. with my husband. Washington, D.C. is an overwhelming city for someone used to prairies and rolling hills. It scared me; family, community, and doing what you love easily gets lost in the D.C. quest for “success.” Like Jackie, I dreamed of adventure and escape.

I’d never been to Alaska before starting this film. Now that I have, I know I’ll always come back. As many Alaskans know better than I, it’s a place that gets into your blood and becomes a part of who you are. What I love about Jackie’s story is how much it’s also the story of many brave, incredible people who follow their passions in Alaska.

I’m not a cook. My husband does the cooking in our family. To make this movie, I had a lot to learn about baking. Because I funded Baking Alaska out of my meager teaching assistant stipend, Jackie and Kathy let me eat their goodies freely. I allowed myself to indulge in each type of cookie in the name of “project research”.

I also learned how to make savory scones, such as the bacon cheddar ones in the recipe here, because I can’t find them for sale anywhere in Washington D.C. Why is there better food in Alaska than other places in the U.S.? The answer might be in passion, artistry and, maybe, a little magic.

Please check out the video to see clips from Baking Alaska and, if you’re able, donate to help us finish the movie and distribute it to audiences in Alaska and throughout the U.S. There are great thank you prizes for donating, including DVDs of the film, movie posters, and bakery goodies. I’d really appreciate your support.

If you can’t donate, sharing the Kickstarter link with friends also helps.

PS: Inspired by Jackie and Kathy, I’m leaving Washington D.C. in December to seek adventure. I hope Baking Alaska inspires others to follow their dreams. Kari 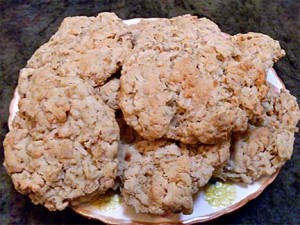 5 Responses to BAKING ALASKA, A Documentary: Two Sisters’ Quest for a New Life