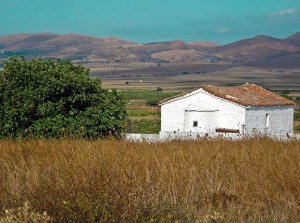 In days gone by, when Stev­en’s grandmother was alive and our house was hers, a massive fig tree dominated the tiny yard. Its crown of broad, leathery leaves provided welcome shelter from the scorching Greek sun. Like the house, the old fig was part of grandmother’s dowry.

By 1985, when my memory of the tree was formed, sweet purple figs with amber centers grew high in its branches, far too high to pick. Over-ripe figs littered the dirt yard, their seedy flesh split open, attracting wasps and squishing underfoot.

The hot summer day I met the old fig, an epic Greek family battle erupted over the house, pushing generations of wounds and slights into the open (a fascinating story, but for another day). The battle ended in victory, but after it was over, the house stood vacant for a decade.

While vacant, though the house was locked and boarded, next-door neighbor and cousin Thanasis kept a pig and donkey in the yard. The donkey was chained to the old fig and paced the tiny yard, back and forth, month after month, to and fro, year after year. The chain encircling the fig’s trunk slowly but surely girdled the tree.

The old fig couldn’t survive the girdling. It died slowly, every year producing fewer leaves. In the end, only naked, tangled branches were left, whistling in the island winds. With heavy heart, Steven cut it down. No more shade, no more figs, no more ancestral connection. In one fell swoop, the character of the house and yard changed forever. Losing an ancient tree is painful.

Without the fig's shade, roses thrive in our Greek garden

We complained bitterly. Without the old fig, it was impossible to sit outside on summer afternoons. The house was unbearably hot from sun beating in the windows. The yard once filled by deep cool shade was choked with prickly weeds.

Eventually, we realized with the tree gone, there was room for a garden. Between our annual visits, friends, neighbors, and cousins planted and tended flowers. Waste space was slowly transformed into garden. Blooming roses, jasmine, and a host of other flowers now greet our arrival. One cousin grows a vegetable garden in the yard; its fresh produce graces our table when we’re in the village.

The passing of the old fig also made space to renovate a crumbling balcony. We again have shady, comfortable outdoor living space where we sit and eat and entertain, but now surrounded by a beautiful garden.

While the huge fig of my memory is gone, it actually wasn’t dead. Fig trees, it turns out, are notoriously hard to kill. Even though it had been cut down to the dirt, one year later it sent up a few thin suckers from the roots. The year after that, it sent more suckers. With each passing year, the fig gets stronger and more vital.

For the last five years, we’ve espaliered fig suckers into a fence that runs along our south property line, giving us welcome, late summer privacy. Though we’d never have voluntarily cut it down, it’s a blessing the old fig is gone. Thank God for Thanasis and his donkey. 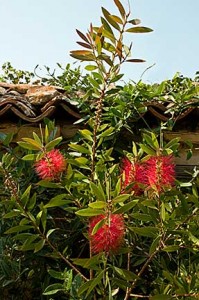 Callistemon tree in our Greek garden

Mediterranean cooking will always be my first love. As time passed from its creation, I felt increasingly constrained by the limited scope my blog’s title implied and the limitations of the blogging software I was using. I wanted to write about a full range of food-related topics, and to publically answer interesting questions I was fielding from readers, whether or not the Mediterranean region was involved.

Sitting on our shady veranda in Greece, surrounded by a beautiful fragrant garden, I knew Mediterranean Cooking in Alaska had to be reconceived. Taking the fig tree as my inspiration, I shifted focus from writing my old blog to creating a new one. I planned, I charted, I schemed.

Eventually, I developed the website you’re now reading. The recipes and stories that make up Mediterranean Cooking in Alaska are its heart, as they are mine. But there are many exciting new features, including:

All posts from the original Mediterranean Cooking in Alaska will eventually be transferred to www.laurieconstantino.com; I hope to have that process complete in the next two months.

This has been a complex project, and one I would not have been able to do without the wonderful team at 3 Crown Creative in Seattle: Susan Rosenbaum did the logo, Tom Collicott the site design, and Carol Deckelbaum (who is a genius) the incredibly complicated and truly amazing computer work.

As for the fig tree in our Greek yard, it’s now been years since its rebirth and transformation. It is once again producing sweet purple fruit. I eat my fill of fresh figs when we’re there and turn the rest into fig jam.

I bring fig jam back to Anchorage and use it in Pasta Flora, a traditional Greek Jam Tart. Travelling from Alaska to Greece, I bring raspberry jam and use that instead. Raspberries don’t exist on the Greek island where our house is, so Raspberry Jam Tart is always a treat for Greek friends and relatives. No matter where I live, even if I’m out of homemade jam, Greek Jam Tart is one of my most reliable recipes when I need to bring dessert to a party.