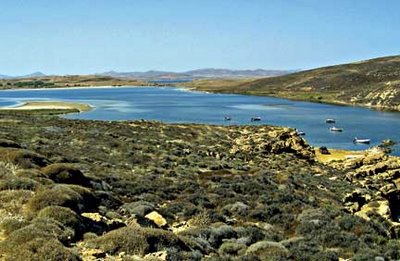 Sandy beaches and rocky promontories alternate along the island’s irregular coastline. Mounds of wild thyme cover the hills sloping down to the sea, and scent the sea air with their heady aroma. 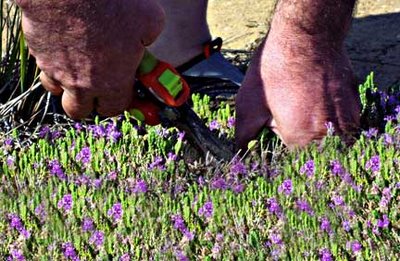 By the start of summer, the wild thyme is in bloom. Yiannis, our beekeeper friend, has already moved his hives to fields near the shore and the abundantly blooming thyme. The bees spend their summer making thyme-flavored honey that Yiannis harvests and sells to locals and tourists alike.

I fell in love with thyme honey years ago at a galakatopoleio, a type of Greek store that sells milk, yogurt, and desserts like rice pudding (rizogalo) and custard pies (galaktoboureko). We’d stopped for a late breakfast and I ordered yogurt.

Used to American yogurt, which has a much thinner consistency than its Greek counterpart, I was surprised to see the galaktopoleio’s proprietor slice off a thick slab from a long yogurt loaf. He served the yogurt slice with liberal drizzlings of thyme honey. Despite its simplicity, the combination was utter perfection. Thyme honey, unlike the bland clover honey I grew up with, has a robust flavor.

When we return from Greece each year, we always have a supply of wild thyme honey in our baggage. However, in Alaska, Greek yogurt is difficult, and usually impossible, to find. When available, it’s too expensive for my budget. 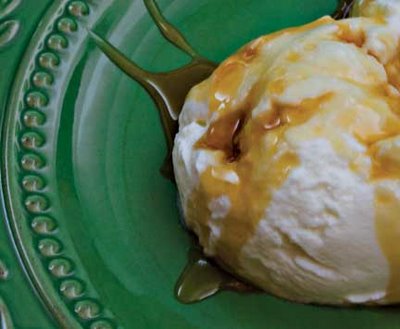 If I crave Greek yogurt and honey in Alaska, I buy plain, whole-milk yogurt (Pavel’s Original Russian Yogurt, available at Natural Pantry in Anchorage, is my favorite brand), and strain it for at least an hour through a paper towel set in a colander. Strained American yogurt mimics the texture of the yogurt we buy in Greece. I like straining yogurt right when I bring it home from the market; that way, it’s ready to eat at my convenience. All I need do is drizzle a scoop of strained yogurt with Yiannis’ honey, and my favorite breakfast is ready to serve.

Honey isn’t a newcomer to the Greek table. It’s been an important ingredient in Greek cooking throughout recorded history and continuing to the present day. In The Deipnosophistae of Athenaeus, which includes excerpts from the earliest Greek writings about food and cooking, honey appears regularly. Among other uses, the ancient Greeks combined honey with wine, added it to savory sauces, and drizzled it over all kinds of sweets.

Athenaeus (circa 200 AD) catalogs “cheesecakes of every sort and every name,” including many that contain honey. In a recent post, Mariana of History of Greek Food wrote about her version of one cheesecake described by Athenaeus.

On some Greek islands, and notably on Sifnos, Cinnamon-Honey Tart is traditionally made for Easter feasts. It’s worthy of a place at any special occasion table.