All About Leaf Celery aka Cutting Celery 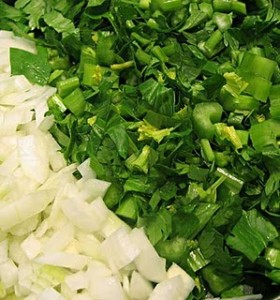 Two readers asked for information about leaf celery, also known as cutting celery, the celery I often recommend using in Mediterranean recipes: “What is the difference between leaf celery and the celery at the grocery store? Can I substitute one for the other?” “Where can I buy leaf celery?”

Three kinds of celery are cultivated for culinary use, one for the stalks, another for the roots, and the third for its leaves:

Leaf celery is closely related to wild celery, and is also known as smallage, cutting celery, or Chinese celery. It looks like a larger version of Italian parsley, and the thin stalks are hollow.

Leaf celery has a stronger, more herby and assertive flavor than the other two varieties and is generally not eaten raw. It gives more flavor to soups and stews than does stalk celery, and I prefer using it for these purposes. If I substitute stalk celery for leaf celery in a recipe, I generally stir in 1/4 cup chopped fresh parsley just before serving to make up for leaf celery’s lost flavor.

The stalks of leaf celery can be tough and fibrous; before adding it to recipes I pay close attention and don’t use any excessively fibrous stalks, saving them for making stock.

Leaf celery is more perishable than stalk celery. To store it, I rinse off any dirt and wrap it in paper towels before putting it in plastic bags in the refrigerator. At up to 2 feet long, it takes up lots of space and rarely fits in my vegetable drawer.

In Greece, rural kitchen gardens often contain one or two leaf celery plants. Villagers don’t harvest celery all at once, as a single plant, as is done in the US with stalk celery. Individual stalks are cut as needed (the “cut and come again” harvesting technique), while the plant continues to thrive and grow more stalks.

Tomato Sauce with Celery and Mint is made with leaf celery, the only variety available most places in Greece. I add celery in two stages to better accentuate its flavor. The sauce may also be made with ordinary stalk celery, although the celery flavor will be less distinct if ordinary celery is used.

Tomato Sauce with Celery and Mint can be used in any recipe that calls for tomato sauce, and is a good topping for all kinds of pasta. I particularly like it with cheese or spinach stuffed ravioli or tortelloni.

The sauce is seasoned with Aleppo pepper, a moderately spicy red pepper sold in crushed flakes. Its sharp but fruity taste pairs well with Mediterranean food. I’m never without it. Aleppo pepper originally came from Syria, near the city of Aleppo, but may be imported into the United States from Turkey due to trade embargoes with Syria.

Aleppo pepper is available in Anchorage at Summit Spice & Tea, or by internet order from Penzey’s, The Spice House, and World Spice Merchants.

4 Responses to All About Leaf Celery aka Cutting Celery

Next Post: How to Prep Celery Roots and Roast Beets