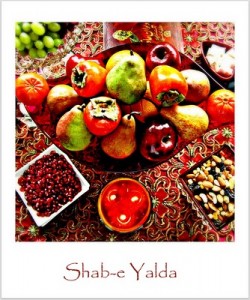 Shab-e Yalda is the longest night of the year; it's been celebrated since ancient times in Persia.

Blog of the Week:

Six months after her mother died, Azita started blogging as a tribute to her mother’s culinary capabilities and knowledge of Persian cooking. Through writing the blog, Azita has become a passionate and enthusiastic cook. She no longer thinks just about preparing meals for her family, but is now curious about food and nutrition. Her new-found enthusiasm and curiosity are reflected in her engaging writing and interesting recipes. 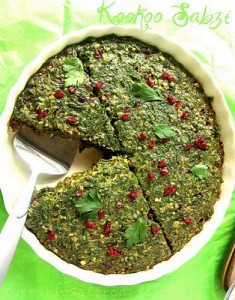 Kookoo Sabzi with Walnuts and Barberries – Azita says Iranians make Kookoo Sabzi for Nowruz, the Persian New Year, which is celebrated on the vernal equinox (in Alaska that occurred on March 20, 2011 at 3:21 pm). Kookoo Sabzi is a Persian frittata stuffed full of fresh herbs. Last year, Azita posted her mother’s traditional Kookoo Sabzi recipe. This month, she posted her own version which includes walnuts, for nutty flavor and crunch, and barberries, for a refreshing sour zing characteristic of Iranian cooking (Azita says dried cranberries can substitute for barberries). UPDATE: For this year’s Persian New Year, I tried Azita’s version of Kookoo Sabzi (it was wonderful), and wrote all about it here. 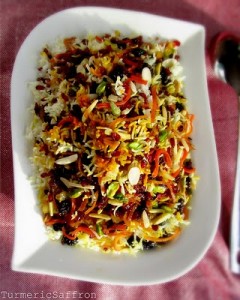 “Molla Nasr al-din [was] a satirical wise man who lived during the Middle Ages. His anecdotal stories are well known in Iran and many of the neighboring countries in the region. Here’s [one story]: Molla was invited to the house of a nobleman in his town. He chose to wear his warm, comfortable and shabby clothes. When he arrived at the door, the doorman quickly turned him back for he did not look prim and proper enough. Molla goes home and puts his best garment on with silver trimmings around his high fancy collar and his long sleeves. He combed his hair and put on some perfume and headed to the dinner party. When he arrived, he was well received and was offered the seat at the top of the sofreh (table cloth). To everyone’s dismay, Molla scooped some soup out and poured it all over his jacket. Then he placed some rice in his pocket and topped it with some lamb stew. As he was stuffing food in his sleeves he was stopped by the nobleman who demanded an explanation for Molla’s mad behavior. Molla responded, ‘When I came in the first time, with my comfortable home clothes, you didn’t let me in the house. Now that I put on this fancy jacket I am suddenly treated with respect. Since these are the clothes that get recognized I might as well feed the food to the jacket!’” From Jeweled Persian Rice – Javaher Polow 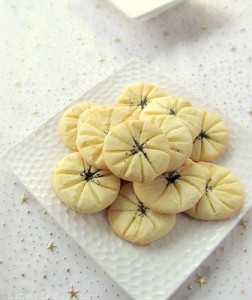 “Naan Berenji [cookies] is one of my favorite Persian sweets which is traditionally made for Nowruz (Persian New Year). … I don’t know if I’ll ever get to make these cookies taste and smell like how they tasted and smelled the first time I ate them when I visited the city of Kermanshah with my family years ago. I remember our summer trip to that region vividly. I recall the day that we approached the Bisotoon  mountain area as the sun was setting and my father was exhausted from driving for such a long time. We stopped by a ghaveh-khaneh (coffee shop), a rest area in the middle of nowhere. My father inquired about the nearest hotels or anywhere that we could spend the night and get some rest. But the given address seemed too far to get to so the owner offered us the roof top of the ghahveh-khaneh and that’s where we spent the night. The memory of us six kids going up an old and flimsy ladder one by one, laying down on just a blanket with no pillows or any sheets, staring at the sky, the moon and stars until I fell asleep is still etched in my mind. Not to mention, glancing at the nearby Bisotoon, which seemed so close towering over our heads as if it was going to fall down on us at any moment!” From Naan Berenji – Persian Rice Flour Cookies