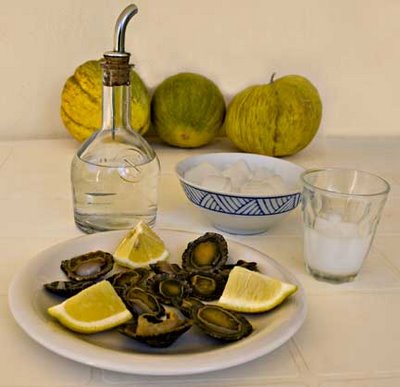 Limpets tightly adhere to rocks in shallow water where the sea meets the shore. They’re found throughout the Mediterranean, and on rocky coastlines around the world.

As a kid growing up on Puget Sound, I gathered limpets’ domed, pointed shells for my shell collection and marveled at their pearlescent undersides. The thought of eating them never crossed my mind.

Then I spent a year on a Greek island in the Northern Aegean Sea.

On a winter afternoon over twenty years ago, my husband returned from a seaside gathering expedition with his cousin Zafiris. Between them, they’d accumulated two giant sacks of sea urchins and a little bag of limpets. 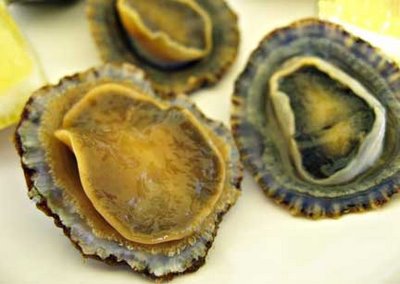 I recognized the limpets immediately but couldn’t fathom why two grown men would gather them. “They’re called petalides” my husband said. “Try one, they’re edible.” He pulled out two limpets the size of half-dollars and wiped algae off the undulating brown feet with a corner of his shirt.

He used the edge of one shell to scrape out the body of the other. “Here,” he said, holding up the shell with the freed limpet. I hesitated. “They’re great!” My husband applied a squeeze of lemon to the limpet, which caused it to recoil and contract. When I still hesitated, he popped the limpet in his mouth and smiled, “Mmm, so good. Better than clams. They taste of the sea.”

Both men smelled of ouzo, which did little to enhance their credibility. It was only after Froso, whose food judgment I trust without question, confirmed their edibility that I slurped its contents into my mouth. Chewing the limpet released a sweet sea flavor, more luscious and delicate than clams and more meaty than oysters, but embracing the deliciousness of both. 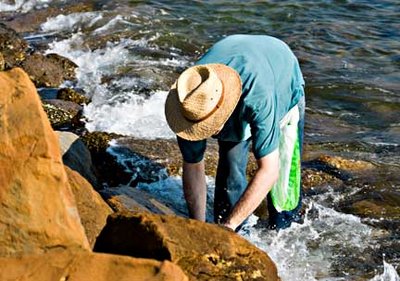 It takes good balance to gather limpets. The rocks on which they live are slippery with algae; breaking waves make the rocks even more treacherous.

The top of limpets’ shells can also be covered with algae, making them tricky to find. At night, limpets graze over the rocks, returning to the same spot every morning. One trick to finding them is to look for a meandering path of cleared algae leading to a small bump that is otherwise indistinguishable from the surrounding rock. 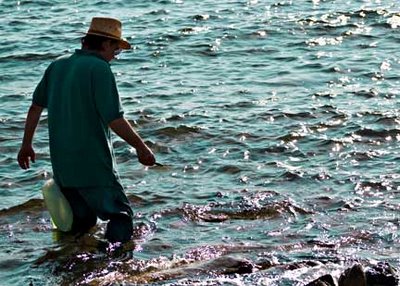 Hunting for Limpets, Knife at the Ready

When you spot a limpet, if you look closely, there’s a small gap between its shell and the rock. If you deftly slide a thin knife blade under the shell and along the rock’s surface, the limpet will pop right off. If you fumble and miss the gap or touch the shell, the limpet sucks its shell tightly to the rock. Limpets fit the rocks so perfectly, and with such amazing force, they’re impossible to dislodge. If this happens, it’s better to forget that limpet and look for another.

My husband loves the sea and gathering. No trip to the beach is complete without bringing something back: sea urchins, fish, octopus, little crabs, or wild thyme from the shores. After one of his more successful winter forays twenty-one years ago, we ate a pile of fresh-from-the-sea raw limpets dressed only with a squeeze of lemon.

The next day we still had a bowel of live limpets residing in the refrigerator. We decided to try a variation of the Constantino family recipe for Clams Casino. The family tops raw clams on the half-shell with a small square of partially cooked smoked bacon, a dash of Tabasco, and a squeeze of lemon. The clams are then broiled until the bacon curls and slightly browns on the edges.

That winter, we were living in a stone house facing a wind-blown harbor with just an oil drip stove (soba – σόμπα in Greek) for heat. The stove heated only one room, but its hot cast-iron top made a convenient-cooking surface. Since we didn’t have a broiler, we used the stove-top to cook the limpets from below. Though the bacon wasn’t crispy, the married flavor of sea, smoke, pork fat, lemon, and Tabasco was indescribably delicious. 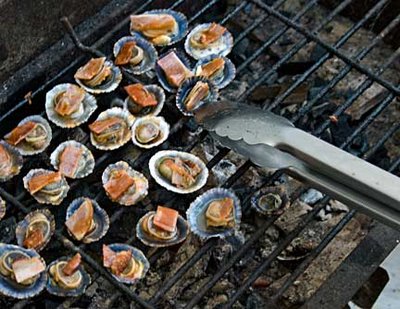 All these years later, as soon as we arrive on the island and the jetlag wears off, we head straight to the beach with a loaf of bread, some olives, and a bottle of ouzo. We gather a bag of limpets and eat our fill. The next day, we feast on Limpets Casino. Even though we now have a broiler, we use the outdoor grill to cook them from below.

As Zafiris said, limpets are perfect with ouzo, raw or cooked. Yamas!

**”Yamas” is a common Greek toast, and is a contraction of the phrase “Stin ygeia mas” (Στην υγεία μας) which means “to our health.”