Messages from the Universe: King Crab, Spinach and Preserved Lemons

For the last five days, I’ve been celebrating my birthday. I’ve indulged myself, and been indulged by friends and husband. My house looks ravaged (indulgence=no cleaning). My blog’s been neglected (indulgence=no writing).

Now it’s Monday, and time to pick up the pieces. The dishwasher’s humming, and a load of clothes is in the washer. I’ve taken out the garbage laden with crab shells from one of my indulgences: live Alaska king crab. 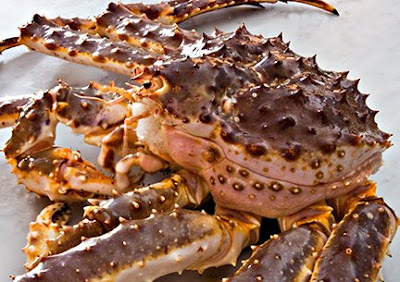 I’ve only ever seen live king crab in Alaska, which is a pity because it’s the best tasting seafood I’ve had in a life of searching out the world’s finest foods from the sea. When fresh, Alaska king crab tastes sweet and salty, with a firm, meaty texture. Frozen king crab legs don’t do justice to the glorious flavor of fresh king crab.

When I was young, we used to buy live king crab off the dock: $5 for small crabs (5-8 pounds) and $10 for large crabs (8-12 pounds). In those days, boiling up four or five king crabs was one of my favorite company dinners. That was before over-fishing threatened king crab stocks and king crab fishing became a highly regulated industry, as it is today.

Now we’re lucky to find live king crab and rarely pay less than $50 for one small crab. In the old days I used to cook with king crab as an ingredient (and still make crab cakes out of rare leftovers). Now, it’s so expensive I only serve unadulterated crab, perhaps with a little melted butter on the side.

Steaming crabs is a recent innovation in our house. For years, I followed my mother’s lead and boiled live crab (guts and all, for better flavor). Then I read about a lobster taste test in which steamed lobsters beat out boiled, so decided to try steaming crab. As with the lobster I’d read about, steamed crab has better, more concentrated flavor than when it’s boiled. Call me a steaming convert.

After cooking and cleaning my birthday crab, I wanted to chill it. That meant making space in my woefully overcrowded refrigerator. When I jerked a bag of Full Circle Farm spinach from where it was precariously balanced on the top shelf, a jar of preserved lemons came tumbling down on me. I took tumbling lemons as a message from the universe, and successfully used them to dress up the night’s spinach side dish.

15 Responses to Messages from the Universe: King Crab, Spinach and Preserved Lemons