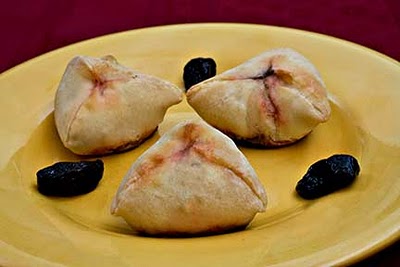 Makes 80 2 1/2” spinach pies
Adapted from recipe by Salwa Abuamsha
Palestinian Spinach Pies are similar to spanakopita (Greek Spinach Pies), but use pita bread dough instead of filo for the wrapping, so aren’t loaded with butter. The filling is spiced with sumac and doesn’t include cheese, so is suitable for religious fasting days and vegans. Palestinian spinach pies can be made with 2 1/2” circles of dough up to 5” circles. Smaller spinach pies are typically made at home, and larger pies are more often seen in bakeries and street stalls. The pies can be made ahead, baked, and refrigerated (or frozen and thawed), and rewarmed for 15 minutes at 350°F.

Make Dough: Place water in large bowl. Sprinkle it with yeast, sprinkle sugar on top, and let sit for 10 minutes, or until yeast begins to foam. Mix in salt, and half of flour. Add rest of flour one cup at a time, just until dough holds together. Knead dough well (either by hand or in a stand mixer), adding flour as necessary until dough is smooth and shiny. You may need more or less flour than called for in the recipe. Put kneaded dough in an oiled bowl to rise, cover bowl with plastic wrap and dishtowel, and put it in warm spot. Let dough rise for 1 hour, or until it has doubled in size.

Make Filling: Wash spinach and dry it as completely as possible. Chop spinach and, with your hands, mix it with remaining ingredients. Thoroughly rub spices into spinach.

Punch down dough and divide it in three. Evenly stretch and roll out one third of the dough until it is 1/4” thick. Use sharp circular ring to cut out circles of dough. Place a circle of dough flat on your hand. 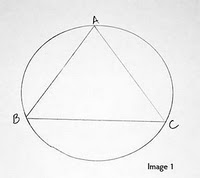 Shaping pies is easier than it sounds – after you’ve made one or two, it will go quickly. As shown in Image 1, you fold up sides of each circle to form a triangle along lines A-B, B-C, and C-A. 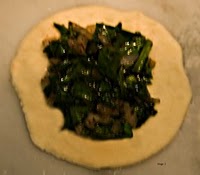 As shown in Image 2, put a spoonful of filling in center of each circle (for 2 1/2” circles, use 1 Tbsp. filling). The sides will stick together better if you keep edges of dough circle dry. 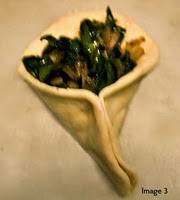 As shown in Image 3, fold up side A-B and side B-C and pinch half the edges together, stopping when you reach the circle’s center, to form a cone. Use your index finger to push the filling down into the cone. 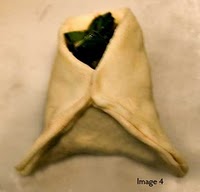 As shown in Image 4, fold up side C-A and pinch half its edge together with half of side B-C, stopping when you reach the circle’s center. 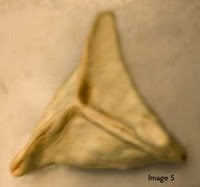 As shown in image 5, pinch the remaining half edges of sides C-A and A-B to form a triangle.

Rest finished pies for 30 minutes before baking them. As each baking sheet is done resting, put it in oven and bake for 15 – 20 minutes, or until dough is crisp and light brown. Place baked pies on racks to cool.

Serve warm or at room temperature.