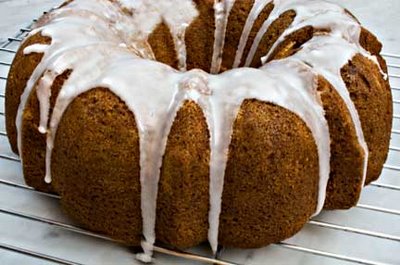 When I was growing up, cupcakes were a homey lunchbox treat. They weren’t seen in upscale bakeries or on fancy tables.

That all changed in 1996 when New York City’s Magnolia Bakery started making cupcakes with extra cake batter. After Magnolia’s cupcakes were featured on Sex and the City, it set off a nationwide cupcake craze. Cupcakes’ popularity continues; Barack Obama recently gave Joe Biden a dozen for his birthday.

In 1999, the owners of Magnolia Bakery, Allysa Torey and Jennifer Appel, published The Magnolia Bakery Cookbook: Old-Fashioned Recipes from New York’s Sweetest Bakery. The slim volume is filled with old-fashioned recipes for cake, cookies, and other desserts, all made with the best possible ingredients.

Last week, I had ripe pears that needed to be used immediately. Magnolia Bakery’s Pear Pecan Cake seemed a wonderful way to use them. I modified the original recipe by adding grated lemon peel to the batter and finishing the cake with a light lemon glaze. The clear lemon flavor balances the pear cake’s richness.

Pear Pecan Cake with Lemon Glaze is moist and delicious. With a cup of hot coffee or tea, it makes a decadent breakfast or mid-morning snack.