Ladenia, Pizza’s Forerunner from the Greek Island of Kimolos 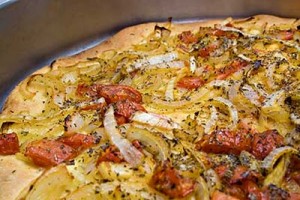 Ladenia is so good I’ve made it three times in three days.

The first day I made Ladenia, it would’ve been good if I hadn’t smoked it with burnt olive oil (more on that later). The second day I made it to redeem myself after the disaster the day before. Ladenia’s wonderful flavor was the sole reason I made it the third day.

Filena Venardou documented the traditional foods of Kimolos in Η Κουζίνα της Κιμώλου (The Cuisine of Kimolos). Venardou says Ladenia is the most “original and characteristic” dish of Kimolos, and is “considered the precursor” of modern pizza. According to Venardou, Ladenia has been made in Kimolos since the time of its domination by the Venetians (1207 – 1566 AD/CE).

Ilias Mamalakis is one of Greece’s most beloved food personalities. Known familiarly by his first name, Ilias has written many cookbooks and magazine articles, and stars in television and radio shows about cooking. I love his gnomish personality and infectious enthusiasm for the traditional foods of Greece.

After Ilias featured Ladenia on television, his recipe for it made the rounds of Greek food blogs. Posters debated how much olive oil should be used and suggested numerous additions to the original recipe: feta, meat, mushrooms, olives, peppers, or herbs such as oregano, marjoram, or basil. One poster reminisced about visiting Kimolos, and buying fresh Ladenia every morning at a bakery before heading to one of the island’s beautiful beaches.

Are you wondering how I smoked my first Ladenia? There’s a lot of olive oil in Ladenia’s topping, and I made the mistake of baking it on a pizza pan. Since there was nothing to stop the oil from running onto the hot oven floor, that’s where too much of it went. The acrid smoke stunk up the house and ruined the Ladenia, which had to be thrown away (and, yes, I also had to scrub down the oven). Here’s the lesson: Ladenia must be baked in a pan with high sides.

UPDATE: Maria from Hania on Crete made a gorgeous version of this recipe, with green peppers added to the topping. You can read about Maria’s Ladenia here.

20 Responses to Ladenia, Pizza’s Forerunner from the Greek Island of Kimolos