How to Prep Celery Roots and Roast Beets 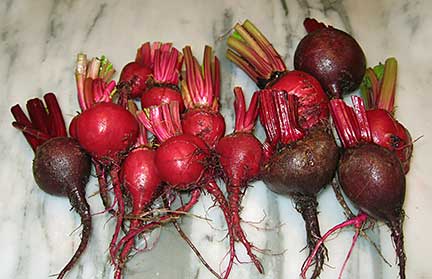 Pristine beets, fresh from the garden or farmers’ market, make me crave skordalia, an intensely flavored Greek garlic spread that combines perfectly with oven-roasted beets. When the two are eaten together, each flavor improves and completes the other.

Our latest CSA box contained beets and two healthy celery roots (aka celeriac). I roasted the beets and used celery roots to make skordalia (traditionally made with bread,  potatoes, or nuts). The skordalia turned out just as I’d imagined: celery root’s herby flavor adds complexity and interest to the pungent garlic.

Celery root isn’t uniformly shaped. It often looks like a misshapen ball of tangled roots. Many people avoid buying celery root because they’re not sure how to make it edible. If you’re one of those people, don’t worry. Prepping celery root is easy.

How to prep celery root: Cut top and bottom off root bulb, creating broad flat surfaces on either end. Put celery root on cutting board, flat side down. Use sharp knife and slice down to remove peel; doing this in small pieces makes the job faster and easier. Once celery root is peeled, cut in half and then in wedges. Use paring knife to remove any soft cottony flesh in center of each wedge. That’s it – celery root is ready to use. 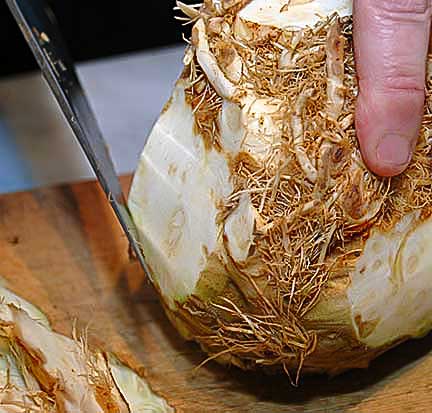 Some people plunk cut celery root in lemon juice spiked water to prevent it from turning brown. I don’t like doing this because cooked celery root can be watery and soaking it in water makes this problem worse.  For the same reason, I never steam or boil celery root, common ways to cook it.

Instead of using water to cook celery root, I toss it with olive oil and salt and oven roast it. This concentrates celery root’s flavors and improves its texture when pureed. If a recipe calls for boiling or steaming celery root, I always roast it instead.

6 Responses to How to Prep Celery Roots and Roast Beets

Previous Post: All About Leaf Celery aka Cutting Celery

Next Post: Anatomy of a Recipe (with Recipe for Savory Fish Cakes / Ψαροκεφτέδες)