Ancient and Modern Greek Cooking with Beans and Grains 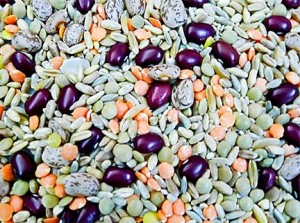 In Greece, dishes combining beans and grains have been served since ancient times. Originally they were offerings to pagan gods. Today, they’re made to honor Greek Orthodox saints and the Virgin Mary.

Others look to a more ancient origin. In Feasting & Fasting in Crete: Delicious Mediterranean Recipes (Kedros Publications, Athens, 2001), Diana Farr Louis says the origins of Polysporia go “back thousands of years and may even have been made by the Minoans. Psilakis [a popular Greek cookbook writer] compares it to the panspermia (all seeds) offered by both the Minoans and ancient Greeks to their gods in thanks for a successful harvest.” 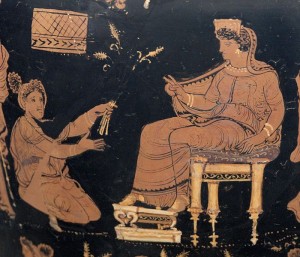 Demeter extends her hand in benediction toward a kneeling supplicant who offers Demeter wheat (Varrese Painter, red-figure hydria, ca. 340 BC, from Apulia)

Historians link Polysporia to Demeter, goddess of the harvest, who reigned over grains, vegetation, and all fruits of the earth. From Demeter, ancient Greeks learned to plant, grow, harvest, and prepare grain. In return, they gave Demeter offerings of grain dishes similar to today’s Polysporia.

Most believe it’s no coincidence that modern Greeks celebrate feasts on days, and in ways, similar to pagan holidays, and that pagan offerings to Demeter morphed into Christian feast day foods.  Polysporia “is child of the incorporation of ancient strong traditions in[to] the Christian religion … Since farming economy depends a lot on nature, [seed-sowing time] continue[s] to be associated and sprinkled with magic,” according to Greek food historian, Mariana Kavroulaki.

Recently Bob’s Red Mill, a purveyor of beans, grains, and baking products,  invited me to write an article for its website. Bob’s sent me a collection of products to use for developing recipes, including Whole Grains and Beans Soup Mix. The minute I saw its ingredient list, remarkably similar to Polysporia’s, I immediately wanted to make a tasty, modern dish of Greek beans and grains.

After testing several versions, I settled on soup seasoned with lemon and fresh dill, a classic Greek pairing. It’s so delicious, everyone who tried it wanted more. I served it with Bobota, rustic Greek cornbread with feta popular in Northern Greece (also made with Bob’s Red Mill products). Bobota makes a wonderful partner for soup of any kind.

In addition to giving me products to use in developing recipes, Bob’s Red Mill donated our Bob’s Red Mill giveaway prize. Rest assured, I’d never recommend a product I don’t personally use and love. In this case, I’ve been a Bob’s Red Mill devotee since the 1970s. Its products are invariably fresh and designed with the home cook in mind. In Alaska, Bob’s Red Mill is often the only locally available source for essential baking and cooking ingredients. 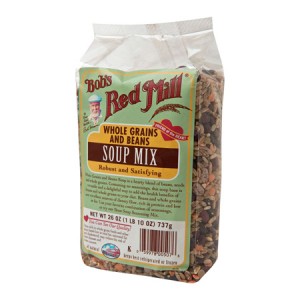 Previous Post: How to Dipnet for Salmon on the Kenai River

Next Post: Blog of the Week: Organically Cooked, Hania, Crete