Improvising with Eggplant and Rosemary 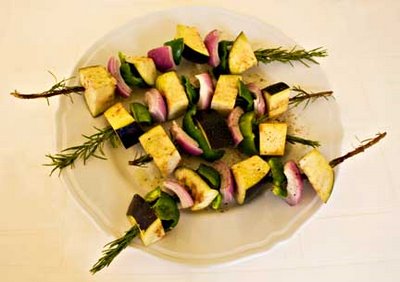 Completing an eggplant trifecta, yesterday we had Eggplant Kebab on Rosemary Skewers. (Eggplant Clafoutis and Spaghetti with Eggplant and Tomato Sauce make up the trifecta’s other legs.)

Eggplant Kebab came about through sheer serendipity. I was washing eggplant, idly thinking about how to prepare it, when I noticed the vase of rosemary branches on the windowsill over the sink.

Rosemary makes splendid souvlaki skewers. Seeing the rosemary while my hands were full of eggplant, a picture of Eggplant Kebab on Rosemary Skewers jumped immediately to mind. I had to have them. 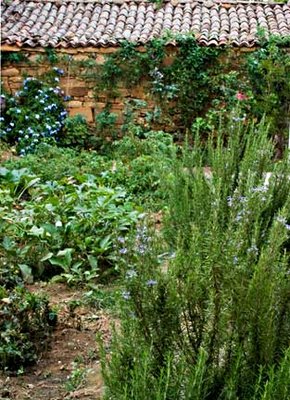 Rosemary Bushes in Garden with Blue Jasmine in top left

Two years ago at Easter we planted two tiny rosemary plants that are now large bushes. The bushes are growing all akimbo, having outgrown the small amount of soil in which they’re planted. The windowsill vase of rosemary contained trimmings from a branch broken off by kittens.

Ah, the kittens! Three years ago we began feeding a mother cat with a litter of four. She’s been back every year since then, each time with a new brood. Over the years, the cat feeding has progressed from once in a while to twice a day, from leftovers in the back yard to cat food on the veranda. 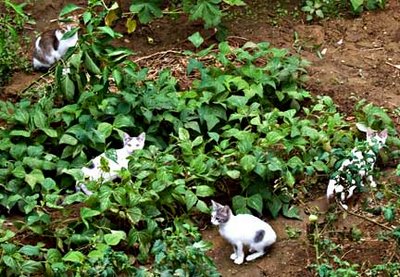 Kittens in the Garden

Effie and Nikos, cousins who live nearby, use our yard for their kitchen garden when we’re not in the village. They generously turn the garden over to us when we’re in Greece. In our absence, Effie and Nikos are at our house most every day to weed, water, or harvest. They say the mother cat and kittens disappeared when we did last year and, endearingly, showed up again only the day before we returned.

The kittens are endlessly entertaining. We’re happy to give them a vacation from scrounging food in dumpsters or catching what they can. 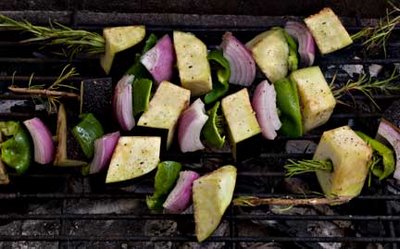 Eggplant Kebab on the Grill

In the future, if the kittens aren’t around to break off some rosemary, I’ll just have to do it myself. I’m definitely making Eggplant Kebab again. 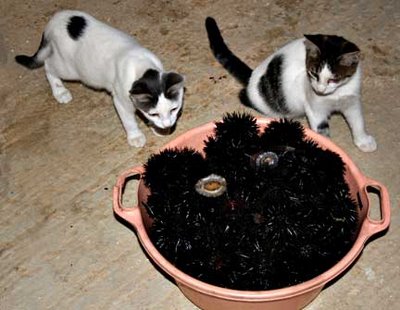 20 Responses to Improvising with Eggplant and Rosemary