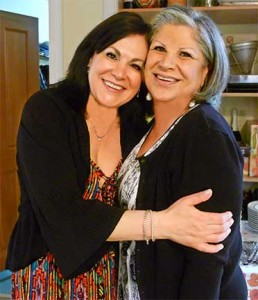 If you want more friends, start cooking. I’ve met most of my favorite people though a shared love of good food, good wine, and good parties.

Homemade food soothes the soul and makes people happy. Cooks need never be lonely. They rely on friends to eat the delicious food pouring from their kitchens. It’s a classic symbiotic relationship.

Sisters Roshi and Ranna Fekrat are smart, funny, and excellent cooks. They’re Iranians who left their homeland­ seeking a better life in Alaska. I met them through friends, and we bonded over cooking.

Ranna is loud and funny and has a lifetime of good tales. If one were looking for a modern-day Scheherazade, someone to spin spellbinding stories for nights on end, Ranna’s the woman. I’m patiently waiting for Ranna to turn her stories into a book.

Younger sister Roshi initially appears reserved, but this illusion vanishes when you get to know her, especially if you catch her cooking. Standing in front of a stove, Roshi laughs and jokes and brings great happiness to those around her as she efficiently turns out mountains of delicious Persian fare.

Ranna learned to cook in the traditional Persian style from her mother, and Roshi learned from her mother and Ranna. Neither uses recipes when they cook, relying on memories of cooking in their mother’s Iranian kitchen. To capture traditional Persian flavors, Roshi and Ranna bring important ingredients, such as dried limes, barberries, and various souring agents, back to Alaska from their travels. 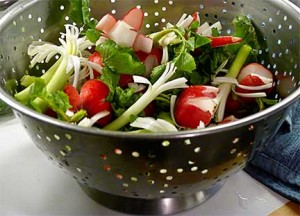 Fresh Radishes and Green Onions to Serve with Persian Food

Ranna and Roshi recently gave me a lesson in Persian cooking. Their first and most important recipe was how to make Persian Rice with Tah-dig, steamed rice with a crusty layer of lavash bread, potatoes, or rice mixed with yogurt. To eat with Persian Rice, they made golden chicken kebabs, seasoned with saffron and grilled on an open fire. Another important tip from Ranna is always to serve Persian food accompanied by fresh radishes, green onions, and herbs.

For those who don’t have a Ranna or Roshi in their lives and want to know more about Persian/Iranian cooking, the best resource is Food of Life: Ancient Persian and Modern Iranian Cooking and Ceremonies (2011, 25th Anniversary, Edition) by Najmieh Batmanglij. 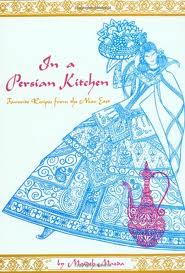 In a Persian Kitchen: Favorite Recipes from the Near East

In a Persian Kitchen: Favorite Recipes from the Near East has easy recipes for traditional Persian/Iranian recipes using ingredients available in North America.

Enter the In a Persian Kitchen: Favorite Recipes from the Near East Giveaway. Note : The deadline for entries is noon (12:00 pm) Alaska time on August 7, 2012.