Blog of the Week: A Season at Stonewall Place

A crab boat makes its way through the pass

Blog of the Week: North to Alaska, A Season at Stonewall Place

Writers: Kari and Pierre are from St. Paul, Minnesota where until recently Pierre worked as a mechanical engineer and Kari spent summers working on organic farms and winters deicing planes at the Minneapolis airport. Last September, Kari and Pierre left their lives in Minnesota to work as winter caretakers at Stonewall Place. 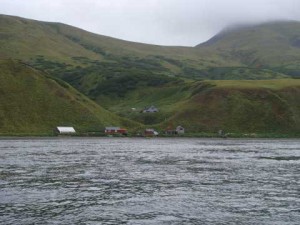 Stonewall Place, seen from the water

Where: Stonewall Place, a remote homestead, is located three miles by boat from False Pass, Alaska (population 55) at 54°49’50”N-163°21’58”W. False Pass lies between the end of the Alaska Peninsula and Unimak Island, the first Aleutian Island, and connects the northern Gulf of Alaska and the Bering Sea.

What: On A Season at Stonewall Place, Kari and Pierre “document [their] adventure, its joys and challenges, as [they] experience winter immersed in the beauty and wildness of Alaska.” Cooking from pantry supplies, greenhouse gleanings, ocean bounty, henhouse collections, and occasional trips to town is part of their adventure. It’s the entirety of A Season at Stonewall Place, however, that makes it a Blog of the Week selection. Kari and Pierre are engaging, their stories compelling, their photographs beautiful, and their daily surprises never-ending. 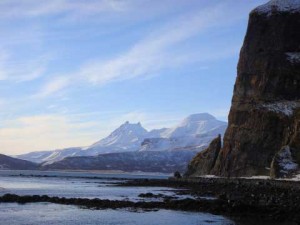 Christmas Corn Chowder – for Kari, corn chowder is one of those foods that’s always right even when nothing else sounds good

“One of the [hens] had…been pecked on and had bare patches on her body… [A] friend of mine who has experience with chickens recommended putting Vick’s on her bare patches to discourage the other chickens from continuing to peck her…I found a small container of Vick’s in the bathroom and Pierre and I marched out to the coop. I wasn’t sure how this was going to work – who would hold her and who would apply the Vick’s? Pierre just wanted to videotape, but I couldn’t manage the whole task by myself. We stood there for a while observing and making a plan. Those beaks and talons really looked sharp all of a sudden. I figured I could grab a hold of her with no problem, but I wasn’t sure about maneuvering her around to apply the Vick’s…[T]he longer we stood there the more the chickens suspected we were up to something. They were on to us! They put up a united front from the roost. Pierre captured it on video and then we promptly left the building…I am admitting to the world that the two of us were effectively intimidated by four hens…Enjoy the video!”Angry Chickens, January 22, 2011 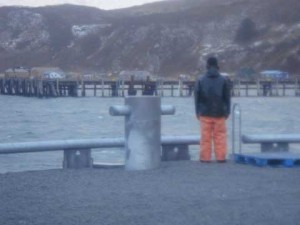 Stuck in the village, waiting for the weather to change

“When we first arrived here at Stonewall Place we were told about caretakers who had been stuck in the village for a week because of bad weather.  At the time I could not imagine how this could happen…As winter has progressed I’ve realized unpredictable long stretches of wild and windy weather are truly a reality. We headed over to the village on Friday morning to pick up some mail…The morning was calm, but foggy, and the forecast was for the wind to diminish further throughout the day. We crossed the pass with no problems and were motoring along the shore of Unimak Island towards the village when the wind picked up. It chased us all the way to town and as I looked back I watched the waves build in the middle of the pass. By the time we reached the old Peter Pan cannery…it had gotten quite rough – a testament to how quickly the weather can change here! We arrived in the village around noon and spent the day running errands and waiting for a break in the weather…In the evening, around 5pm, we thought we had our chance and set out. As we traveled south along the shore of the island, however, the wind only intensified and the waves were getting bigger and bigger. Visibility was poor so we couldn’t see what was ahead, which was another problem. We finally turned around and headed back to the village…and tied up just as it was getting dark. It had also been raining this entire time so we were soaked…We looked like a couple of drowned rats.” A Weekend in the Village, January 13, 2011 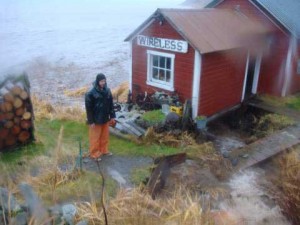 Surveying the damage after the landslide

“On Monday the water level was even higher, flowing over the dams and filling them with rocks and gravel, flowing over the sides and at one of the dams, eroding the ground around it. The place where the two creeks come together is where things really got wild, the normally crystal-clear water filled with mud, sediment and rocks. It was thunderous as it flowed, rocks hitting together as they jostled down the ravine, a disconcerting noise…We realized the earth in that area was being eroded very quickly and we needed to direct the path of the water as best as we could and keep it from washing away any more extremely valuable ground surrounding the wood shop. We began scrounging for boards and got them in place. Pierre spotted one last spot he wanted to fortify with a very large board…Just as we were getting it into place a large part of the hill behind us…broke away and began sliding our way. I heard Pierre tell me to “MOVE!” as I got a glimpse of a huge mound of muddy earth sagging towards us …We…realized we were dealing with forces completely out of our control. We did the best we could and it was time to stand back and let nature run its course. After the landslide we returned to the house only to discover muddy water coming out of the taps.” The Creek (Thanksgiving Week, Part 1), November 28, 2010 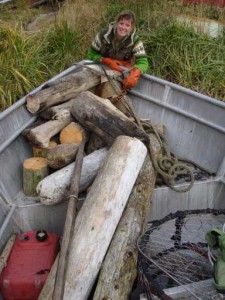 “Collecting firewood here, where the treeless tundra meets the sea, means searching for and cutting up driftwood…This particular beach where we were today…faces Bechevin Bay and out into the Bering Sea. It’s a great place for beach combing and for finding driftwood, especially after a strong north/northwest wind like we experienced last week. Today was beautiful and sunny, the water like glass, although the air is beginning to take on a sharp edge, the first hint of winter. The beach was covered with seaweed, driftwood, and old fishing nets, cast there by the wind, waves and high tides. I was hoping for something especially exciting like a walrus carcass or even a glass float, but our only treasure was firewood, and a lot of it.” A Good Haul of Firewood, October 10, 2010

4 Responses to Blog of the Week: A Season at Stonewall Place