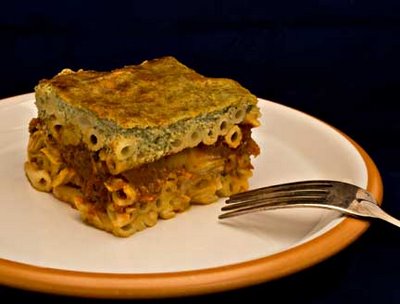 Is it possible to make vegetarian Pastitsio with more zest than its traditional namesake? The answer is an emphatic yes. Artichoke Pastitsio with Basil Béchamel is so alive with flavor it will make your tastebuds stand up and sing the Greek national anthem.

Pastitsio is a traditional Greek dish. As with most foods that’ve been around for a long time, there’s a million and one ways to make Pastitsio. Family and regional variations are the norm rather than the exception. A typical Pastitsio recipe has layers of tube pasta surrounding a meat-based tomato sauce and is topped with creamy béchamel.

When Tony Tahhan and Peter Minakis laid down a challenge to recreate Pastitsio using my own individual style, at first I was stumped. I’d already created a wonderful recipe for Pastitsio with Greens and was doubtful I could come up with anything better.

For nearly a week, I laid in bed at night coming up with Pastitsio ideas, and rejecting them all as uninspired. Then I went to Costco, lost my shopping list, and found my inspiration.

Losing the list forced me to go up and down every Costco aisle, something I rarely do, in hopes that seeing what was there might remind me of what we needed at home. Roaming the aisles helped, but also led to impulse buys (the exact reason I avoid wandering around without a list).

One of my impulse buys was a 65-ounce jar of Kirkland/Cara Mia marinated artichoke hearts. That’s right – a jar of artichokes weighing just over 4 pounds. I didn’t have any particular plans for the artichokes; even so, I had to have them.

That evening when I went to bed for my nightly game of Pastitsio, Pastitsio, What Kind of Pastitsio, a partial answer came almost immediately. I’d make my Pastitsio with marinated artichoke hearts.

In 1982, I bought the ground-breaking Silver Palate Cookbook. The day I bought it, before I had time to crack the book, I went to a friend’s house for dinner. She served tortellini and a spicy tomato sauce full of artichoke hearts. It was love at first taste. I asked for the recipe; she’d made it from the very cookbook I’d just purchased.

Since I first encountered it, I’ve never stopped making Pasta Sauce Raphael, a blend of tomatoes, marinated artichoke hearts, herbs, and lots of black pepper. It’s always a hit, no matter to whom I serve it. Best of all, it’s made with pantry staples.

My well-used Silver Palate Cookbook has a notation that I made Raphael Sauce in July 1987 for Alaska Governor Steve Cowper when he visited our home in Bethel, Alaska. I also made it in 1990 when I catered a fundraising dinner in Juneau, Alaska for not-then-but-later Alaska Governor Tony Knowles. Both Governors loved Pasta Sauce Raphael. At least, they said they did and Alaska Governors never lie, right?

After settling on a Raphael Sauce variation for the Pastitsio filling, I needed a topping that would stand up to its robust flavors. I started with béchamel, the standard topping for Pastitsio, and enhanced it with fresh ricotta cheese and lots of fresh basil.

The end result, Artichoke Pastitsio with Basil Béchamel, was everything I wanted: spicy, but not overwhelming; layers of distinct flavors that taste good on their own and even better blended together; vegetarian, with no compromise on flavor; a recipe for slow evenings at home or rollicking dinner parties; creative fare that fits the traditional Pastitsio mold.

Most importantly, Artichoke Pastitsio with Basil Béchamel is distinctly my own style of food: colorful and bold tasting, using Mediterranean flavor principles and simple techniques. This is a recipe I’ll make again and again.