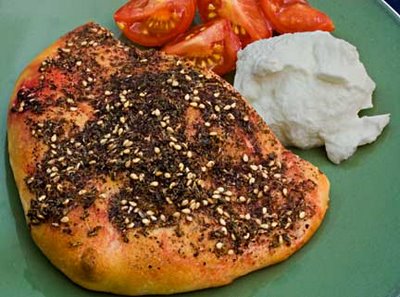 If za’atar is within reach, anyone can make delicious food at the drop of a hat. The possibilities are endless: Za’atar Olives, Za’atar and Labneh, Za’atar Tomato Sauce with Grilled Meat, Za’atar Bread, and Za’atar Pizza are only a few ways to use this versatile ingredient. I almost have my Za’atar Chicken recipe ready to post.

Za’atar is valued for more than great taste. “Who for forty days eats powdered dried leaves of za’tar fasting can be harmed by no serpent.” If the worst happens and you’re bitten by an asp or stung by a scorpion, za’atar cures “the bitings and the stings of venomous beasts.” A Bethlehem proverb teaches, “Thyme and oil lead to the prosperity of the home.” Even more importantly, “eating za’atar improves your memory and makes you more intelligent.”

So what is za’atar?

A. An herb blend
B. Savory
C. Thyme
D. Oregano
E. Biblical hyssop
F. All of the above

Za’atar (ZAHT-ar) is a class of herbs, and includes members of the thyme, oregano, and savory families. Za’atar is also a Middle Eastern herb blend, containing one or more of the za’atar herbs. As with many centuries-old dishes, za’atar blend has many regional and familial variations.

Disparity in za’atar’s spelling is pervasive; za’atar, za’tar, zatar, zahtar, satar, zahatar, and za’ater are all used. The spelling confusion is easy to explain. Za’atar is an Arabic word (الزعتر). Like Greek and other languages that don’t use the Roman alphabet, Arabic is inconsistently transliterated into English.

No matter its local or historical usage, “za’atar” has come to be a generic term used in the Middle East for a group of similarly-flavored members of the herb genus Lamiaceae. Za’atar herbs grow in the same habitat and have similar appearances. These practical factors may have led Middle Easterners to use one word for all the plants.

Linguistic confusion over “za’atar” is not unique to Arabic. In Turkish, the plant groups Origanum, Thymbra, Coridothymus, Satureja, and Thymus, generically called za’atar in Arabic, are all referred to as “kekik.”

Scientific analysis supports the pragmatic use of one word to refer to a plant group rather than a single plant. Gas chromatography and mass spectrometry show “the chemical profiles of the specific chemotypes of Satureja thymbra L. and Thymbra spicata L [a]re very similar. They are also very similar to those of the chemotypes of Coridothymus capitatus and Origanum syriacum.” [These four herb species are all called za’atar.]

Adding to the confusion, each za’atar herb is known by more than one name:

There are also several varieties of commercially available za’atar blends. For example, according to Paula Wolfert, “The taste of a za’atar mixture can be herbal, nutty, or toasty. …’Israeli’ is a pale green blend of pungent herbs that includes the biblical hyssop, along with toasted sesame seeds and sumac. The ‘Syrian’ blend, the color of sand, has a decidedly toasty flavor. The ‘Jordanian’ blend is dark green and very herbal, with some turmeric.” These aren’t the only za’atar blends; each spice merchant and family has a unique formula.

Before creating my own za’atar blend, I bought and tasted several commercially available varieties. I experimented with diverse combinations of herbs trying to best approximate the flavor of my favorite commercial brand. I also read as many English-language za’atar recipes as I could find.

For the herbal flavor in za’atar blend, many North American recipes use only dried domestic thyme, or a mixture of domestic thyme and domestic marjoram. These recipes, when tasted side by side with imported za’atar blends, tasted bland to me. I discovered that Greek oregano (preferably, but not necessarily, wild-harvested and sold on the stem) is key to creating flavorful za’atar in Alaska. Greek oregano’s spicy flavor, when tempered by combining it with dried wild or domestic thyme, approximates the flavor of authentic za’atar blend.

For anyone interested in growing their own, the various plants referred to as za’atar can be purchased from Well Sweep Herb Farm or Mountain Valley Growers. Although they’re tasty, keep in mind that most domestically grown herbs don’t have the flavor of their wild progenitors. There’s nothing like scarce water, poor soil, and hot sun for developing flavor.

For those who live where there are Middle Eastern markets or specialty stores, by all means buy ready-made, preferably imported, za’atar. You can also order za’atar blends online.In Anchorage, you can buy sumac, a key ingredient in my za’atar blend, at Sagaya, City Market, and Summit Spice. Summit Spice sells its own Anchorage-made za’atar blend in tiny packets using marjoram, thyme, sumac, and sesame seeds. Summit also has a product labeled “Greek oregano,” which they tell me may be grown on farms in Greece or Turkey, depending on the shipment.