All About Oysters: How Oysters Grow and How to Store Oysters

“The best thing about oyster farming is knowing I’m bringing to market the finest oysters in the world,” said Oyster Farmer Mike Nakada when asked why he loves his work. “Oysters don’t spawn in Alaska’s cold waters [spawning negatively effects flavor], and once seeded, they grow to maturity in a pristine bay with plenty of food.” As a result, Nakada said, “Alaska’s oysters are sweet, plump, and juicy, exactly how oyster lovers around the world like them best.”

Nakada had been an Alaskan fisherman for over 40 years before he switched to oyster farming. He crabbed in Cook Inlet, long-lined in Prince William Sound, and fished salmon in False Pass. He decided oyster farming would be a good retirement activity: simple, easy, and not very time consuming. He started with one oyster farm and, in short order, bought three more.

“I thought I was retiring, but that isn’t what happened. Now I’m a farmer, mechanic, babysitter, cook, net-maker, boat repairman, and equipment operator. To be a good shellfish farmer, you need many different skills. You also need a lot of patience. A lot.” advised Nakada.

Nakada sells three sizes of oysters: petite (2 3/4” – 3″), medium (3”-4”), and large (over 4”). He compared the difference in oyster size to differing heights among humans. “Petites are short people, larges are tall people. Which tastes better is purely personal preference. Some people like big old oysters but, mostly, they end up cooking them. I prefer petites and I like them best raw with a squeeze of lemon.”

Normally, oysters mature in 3.5 to 4 years, but petites need longer, usually at least 5 years. “Oysters are better eating when older, which is why petites are better; they’ve been in the water longer.” Nakada advises to look for oysters with deep, rounded bottoms. With more room to grow, oysters with this shell type are reliably plump and delicious. 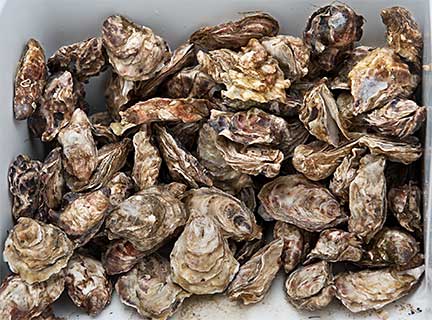 To make sure oysters go to market in perfect condition, Nakada “hardens them off” for at least a month before sale. He brings oysters in from deep water nets and puts them in the intertidal zone where the tide goes in and out, covering and uncovering the oysters. “Hardening makes oysters tougher and smarter. They learn to close their shells tightly when not in water, which helps them stay wet during transport.”

Storing oysters properly is key to safely eating them raw. Nakada says pathogens like  vibrio parahaemolyticus may always be present ocean waters, but only bloom when oysters reach temperatures of 60ºF and above. “40-42ºF is the magic number. We don’t ever let our oysters get above this temperature.”

Nakada recommends keeping oysters on ice in a cooler. To prevent them from getting too cold (which can kill them), Nakada advises to separate the oysters and ice with newspaper or cardboard. This technique keeps oysters cool and alive.

Nakada closed our conversation with an ode to Jakalof Bay: “I spent my life on the ocean, and thought I knew it. Being in one place, as I am now, I have a whole different view of things. Watching the seasons in one little bay, I know where barnacles and mussels grow. I know that from the middle of May through summer, kelp grow 8-12” a day. One day! I watch everything and know more about my little chunk of ocean than I learned in 40 years of fishing.”

“It’s hard work, but shellfish farming is way more relaxing than fishing. I don’t need to worry about spare parts and breaking down. I have the time to fix equipment without having to buy expensive new parts. I can take an old net and fix it; I don’t need the best like gillnetters do. I also don’t miss the aggression and competition, and the need to outsmart other fishermen. I use common sense to make most decisions. I’m a happy man.” 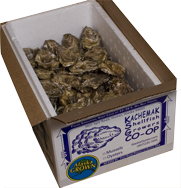 Nakada used to sell his oysters in farmers’ markets, but his operation is too small to support market sales. He still sells off his dock, but everything else is brokered and sold through Kachemak Shellfish Growers’ Co-op.  The Co-op sells and ships fresh raw oysters and delicious smoked oysters online. The Co-op is generously offering to readers of my website the opportunity to win 2 dozen fresh raw Kachemak Bay Oysters and 2 dozen smoked Alaskan oysters (shipping included).

Note: Kachemak Shellfish Growers’ C0-op offered the giveaway after we’d already bought and consumed the oysters (and after I’d written this article).

Last Friday, Kathleen Metcalfe and Eric Brudie brought us 15 dozen oysters they bought off Mike Nakada’s dock (for the drive to Anchorage, the oysters were in an ice chest and kept at the recommended proper temperature). We ate most of the oysters raw, with a squeeze of lemon or with one of four sauces: Sherry-Vinegar & Shallot Mignonette and three salsas from Nobu restaurant in New York City.

The remaining oysters we grilled with Chili Butter or Garlic-Parsley Butter. These oysters were amazing. Even people who claim not to like cooked oysters downed these with gusto. Half our group preferred Chili Butter and the rest preferred Garlic-Parsley Butter. I loved them both. Next time you’re in a party mood, rustle up your friends, find a passel of oysters, and decide for yourself the best way to eat them.

5 Responses to All About Oysters: How Oysters Grow and How to Store Oysters

Previous Post: The Day a Tomato Made Me Love Carrots