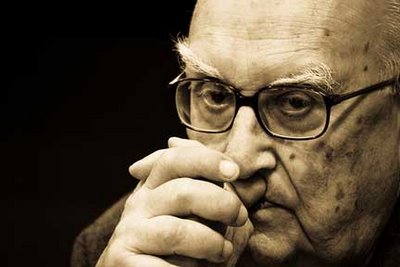 English language books are hard to find on the island.

I carefully select those to bring with us, focusing on books we’ll both enjoy and want to reread. After several years, most books recede far enough into memory that rediscovering them is a pleasure. Since airlines have cracked down on weight limits, prudent book selection is more important than ever.

Two years ago my parents sent us the first six volumes of Andrea Camilleri’s wondrously good Inspector Montalbano series, set in Sicily and skillfully translated by poet Stephen Sartarelli. A few pages into the first book, I realized the series was perfect for the island. I quit reading and put the Camilleri books in my “bring to the island” corner.

Then my head exploded and I was off reading for longer than I’d planned. Shortly before we left for Greece this year, to my great joy, I finally was able to read books again. I dug out the Montalbano series and packed them for the trip.

I began getting to know Inspector Montalbano our first day on the island. One week later, thoroughly captivated by the cantankerous, world-weary, enigmatic inspector, I finished the last of the six books. I’m already looking forward to rereading them, but first I’ll track down and devour the rest of the series.

Here’s Camilleri/Sartarelli describing the inspector in the opening scene of The Terra-Cotta Dog (book 2):

To judge from the entrance the dawn was making, it promised to be a very iffy day – that is, blasts of angry sunlight one minute, fits of freezing rain the next, all of it seasoned with sudden gusts of wind – one of those days when someone who is sensitive to abrupt shifts in weather and suffers them in his blood and brain is likely to change opinion and direction continuously, like those sheets of tin, cut in the shape of banners and roosters, that spin every which way on rooftops with each new puff of wind. Inspector Salvo Montalbano had always belonged to this unhappy category of humanity.

Camilleri’s prose brings Sicily’s people, and its highways and byways, vividly to life. In the original Italian, Camilleri uses Sicilian dialect to create colorful characterizations and bring humor to stories that might otherwise be overly dark. Sartarelli effectively captures the dialect’s essence in his creative translation.Inspector Montalbano loves to eat, and insists on doing so silently, the better to appreciate every nuance in the dishes set before him. He thinks poorly of those who cook badly, and when forced to eat bad food (“… shamefully overcooked pasta, a beef stew conceived by an obviously deranged mind, and dishwater coffee of a sort that even airline crews wouldn’t foist on anyone…”), he heads out for a meal good enough to lift him out of the gloom into which bad food plunges him.

In the course of investigating a disappearance in The Snack Thief (Book 3), Inspector Montalbano interviews a “well-dressed seventy-year-old lady … in a wheelchair.” When the interview is over, the woman invites the inspector to lunch:

“Well, signora, thank you so much …,” the inspector began, standing up.“Why don’t you stay and eat with me?”

Montalbano felt his stomach blanch. Signora Clementina was sweet and nice, but she probably lived on semolina and boiled potatoes.

“Actually, I have so much to –“ “Pina, the housekeeper, is an excellent cook, believe me. For today she’s made pasta alla Norma, you know, with fried eggplant and ricotta Salata.”

“Jesus!” said Montalbano, sitting back down.

“And braised beef for the second course.”

“Why are you so surprised?”

“Aren’t those dishes a little heavy for you?”

“Why? I’ve got a stronger stomach than any of these twenty-year-old girls who can happily go a whole day on half an apple and some carrot juice. Or perhaps you’re of the same opinion as my son Giulio?”

“I don’t have the pleasure of knowing what that is.”

“He says it’s undignified to eat such things at my age. He considers me a bit shameless. He thinks I should live on porridges. So what will it be? Are you staying?”

Although food plays only a supporting role in the Montalbano books, Camilleri’s descriptions of traditional Sicilian dishes are inspirational. I read the above passage just before lunch and, coincidentally, had the ingredients on hand to make Pasta alla Norma. So I did.

Montalbano was right to stay for lunch with Signora Clementina. Eggplant and Tomato Sauce with Spaghetti is absolutely delicious.