by Laurie Constantino and Nora Morse 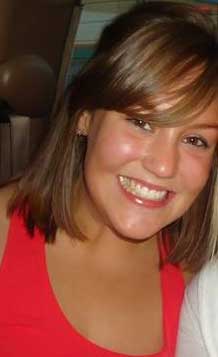 Laurie: To cook well, high quality ingredients are essential, as is being able to source ingredients locally. As a result, no matter where they live, dedicated cooks are intimately familiar with locally available ingredients and regularly troll stores for new products. In other words, good cooks don’t dodge the lodge!** Check out every aisle; often you’ll find something new and inspirational.

In Alaska, finding quality ingredients can be a challenge.  Costco, Sagaya, Natural Pantry, Fromagio’s Artisan Cheese, C&J Meats, Teddy’s Tasty Meats, and Mr. Prime Beef are all great stores, but for many specialty, unusual, or ethnic ingredients, Anchorage cooks must rely on ethnic markets. Luckily, the ethnic store owners where I shop are friendly, helpful, and willing to explain the products on their shelves.

Last week, for Cooking Lesson #1, I took Nora Morse to some of my favorite Anchorage stores. Starting today, April 1, and continuing through next week, Nora and I will chat about the stores we visited. Lesson #1 (all 5 parts) is the first of a series of columns Nora (and I) are writing about her cooking lessons. Lesson #2: Knife Skills is scheduled to run next.

Nora: I’ve lived in Anchorage my whole life. When I was younger I was very loyal to Carrs, the good Carrs, before it was Safeway. I actually remember the sense of sadness I felt when Safeway bought Carrs. (I was a very emotional kid.) I also remember when Sagaya was still on Spenard. I’d walk the aisles with my parents and gaze at all the food I’d never heard of (keep in mind I was a kid — just seeing live lobsters fascinated me). In recent years, my grocery experiences have been monotonous.

This week my world expanded. Laurie took me to places in Anchorage I didn’t even know existed. We went to three Asian markets and one Eastern European market/deli. I’ve highlighted the best things at each market.

Laurie: I love Sagaya and shop there regularly, but have more fun at smaller ethnic markets. As for Carrs, I’m with Nora. Carr-Gottstein had a genius distribution system, which no other Anchorage grocery has been able to match. Because it was locally headquartered, Carr-Gottstein was highly skilled at matching its offerings to Anchorage needs. It turns out Anchorage was spoiled by Carr-Gottstein and never knew it; a clear “don’t know what you’ve got till its gone” situation. 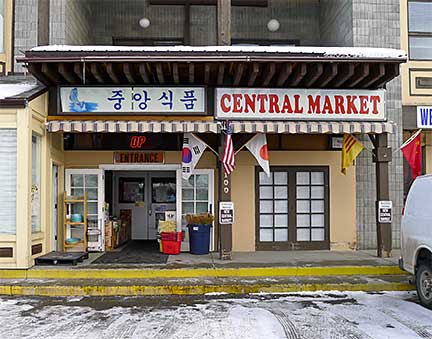 Central Market in the Valhalla Center on Northern Lights Blvd. in Anchorage (Photograph by Laurie Constantino)

Nora: Central Market on Northern Lights opened earliest, so we went there first. 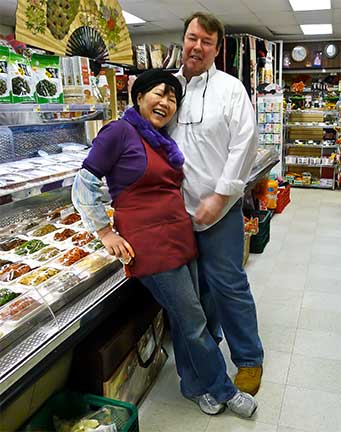 Laurie: Hyun “Sonya” Yoo and Joseph “Mr. Joe” Clark, are owner and general manager of Central Market, located at 555 W. Northern Lights Blvd. at the Valhalla Center’s west end. Sonya is from South Korea, while Joe was born and raised in Michigan. Joe says he and Sonya bend over backwards to fulfill customers’ needs and desires. Their goal is to make it possible for ethnic families to cook different traditional foods every day of the week. “The magic of our store is its ethnic diversity,” explained Joe. New Central Market is open from 9 am to 8 pm daily.

Joe is a natural-born storyteller. He entertained me with stories about eating live baby octopus and using soju (high potency Korean booze distilled from rice) to dislodge tentacles grasping onto his throat instead of going down his gullet and life in Asia as an American military man.

Nora: Central Market has by far the best knick-knacks and cooking tools of all the stores we visited. More importantly, it has a large selection of house-made Korean banchan. Banchan are small plates, sort of like tapas, served with a traditional Korean meal. At Central Market, banchan ranges from Korean black beans to kimchi to squid, all prepackaged and ready to serve. They ‘d make a great starter to any Asian meal! And talk about easy! 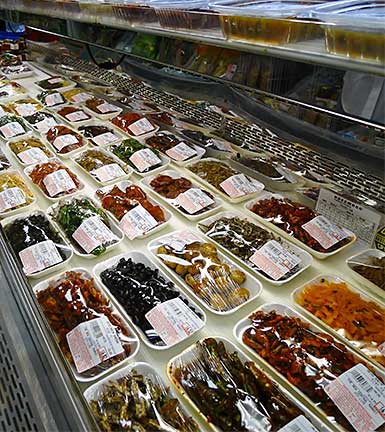 Laurie: Banchan! I love banchan. New Central market makes banchan fresh every day in its on-premises kitchen. The packages are beautiful and drool-worthy.  If you’ve never before eaten banchan, try experimenting with one or two of Central Market’s offerings. Ask for Mr. Joe and he’ll help pick the right banchan for your palate. Oh! I almost forgot! Stay away from the fish entrails. Unless you’re used to eating them, they’re nasty. Trust me on this; Mr. Joe agrees. 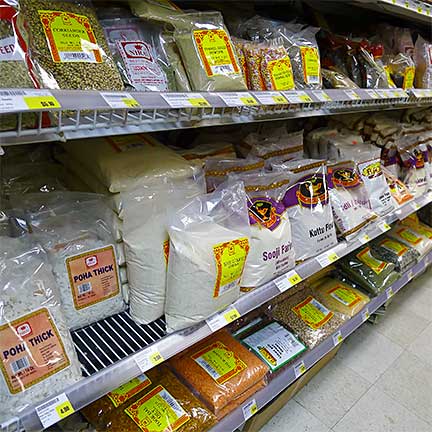 Indian ingredients, many gluten-free, at the Central Market in Anchorage (Photograph by Laurie Constantino)

Nora: New Central Market was also great for spices, particularly Indian spices. They had all the spices you could think of for cheap!! People who like Indian food, know how to cook Indian food, or want to explore the world of Indian cooking, can find most of what they need here, including a great selection of Indian beans, lentils, and pickles.  And the spices aren’t just for Indians! Many cuisines, ethnic or not, use the spices sold here. 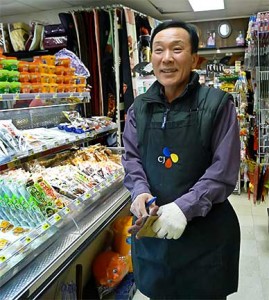 Thomas Kim, originally from South Korea, works at Central Market in Anchorage and is always happy to help customers navigate the store (Photograph by Laurie Constantino)

Laurie: For people on special diets – gluten-free, wheat-free, lactose-free, paleo, etc. – the Central Market is a great place to shop. If you can’t find something immediately, best ask for help. For example, kaffir lime and curry leaves are impossible to find without help; they’re well hidden behind a wall in the freezer section. 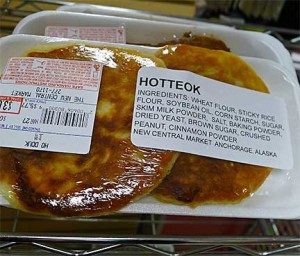 Nora: While there, Laurie and I needed a snack and settled on a mystery “pancake” with two names on the label: Hotteok and Ho Dduk. We weren’t completely sure of what it was, but it was warm and looked good. It turned out to be a pancake filled with honey, cinnamon, and peanuts. It was really good!! Even writing about it now is making my stomach growl!

Laurie: That stuffed pancake was delicious! Just like Nora, writing about it is making me hungry. If I weren’t dedicated to cutting out sweets, I’d go get one now. Or even better, I’d try making them myself. In Korea, stuffed pancakes are common winter street food and I see why; they fortified us for the rest of our chilly shopping day.

Here’s a good sounding Hotteok recipe from Beyond Kimchee’s website. If you try the recipe, please let me know how it turns out.

For gardeners, it’s time to start planting vegetable seeds. We’ve got our first batch of seeds in and need to visit Central Market to buy more. Spring is here! 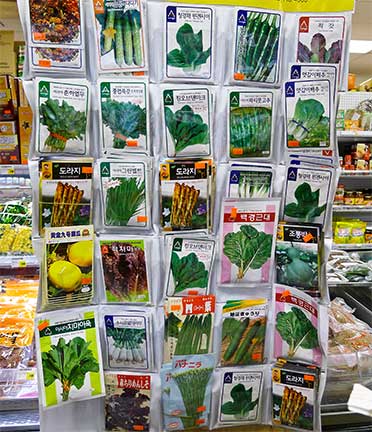 [Nora and Laurie’s food adventures will continue. We visit Lucky Market (northeast corner of Arctic and International) Tuesday April 2; APA Asian Market (southwest corner of 36th and C) Wednesday April 3; Eastern European Store & Deli (36th east of Arctic) will run next week. The order of visiting stores was random and doesn’t reflect a preference of one store over the others.]