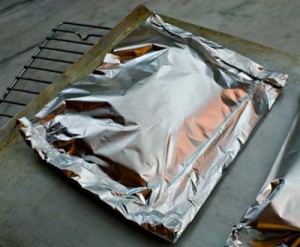 During the Greek War of Independence against the Ottoman Turks, Klefts were irregular guerilla fighters. Among their many feats, Klefts famously stole sheep and roasted them slowly over buried fires. This trick prevented the Ottomans from smelling meat and finding the guerillas.

Kleftiko is a lamb dish named after the Klefts’ cooking style. Traditionally, the meat was cooked in buried lamb skins or clay pots. In modern versions of kleftiko, lamb, vegetables, and seasonings are wrapped tightly in foil or parchment paper, and slowly cooked in the oven. The meat ends up succulent, with all its flavor sealed inside the packet.

Instead of using lamb, I employed the same closed-container technique to make Salmon Kleftiko. Salmon cooks quickly, so it doesn’t need to be cooked at low temperature for a long time, as does lamb.

The five main varieties of wild salmon harvested in Alaska are king or Chinook (Oncorhynchus tschawytscha), silver or coho (Oncorhynchus kisutch), red or sockeye (Oncorhynchus nerka), pink or humpy (Oncorhynchus gorbuscha), and chum or dog (Oncorhynchus keta). Having lived so long with an abundance of wild, ocean-caught salmon, I know how badly farmed salmon stands up in comparison.

I prefer kings for eating fresh, silvers for freezing, and reds for smoking. As for pinks and chums, their flesh is pale and their flavor mild. They don’t have much fat so they’re easy to overcook. Many Alaskans throw pinks and chums back in order to make their limits with higher quality fish. Yes, we’re spoiled.

Although pinks are less desirable than other species, they’re quite tasty if properly prepared. The key to making fresh or frozen pink salmon taste good is moist heat; this helps prevent the fish from overcooking or drying out.

After my husband’s recent fishing trip, we ended up with one pink salmon among the more desirable silvers; we filleted and froze everything. Yesterday, I went to the freezer for silver salmon and accidentally grabbed a packet of pink. I put on hold my plan for grilled silver salmon (pinks dry out on the grill) and decided on Salmon Kleftiko.

The comments to this post included an extended discussion about the general propriety of naming a dish cooked in individual packets as “Kleftiko” and the specific propriety of referring to a fish dish as “Kleftiko.” Although I named the dish in homage to the lamb original, given the interest in the topic, here’s some additional information about “kleftiko” as that term is used by modern Greek food writers.

Aglaia Kremezi, Diane Kochilas, Vefa Alexiadou, and Rosemary Barron are four of the most prominent English-language Greek cookbook writers alive today (all but Barron are Greek and publish their cookbooks in both Greek and English). All agree that lamb cooked in individual foil or parchment packets are properly called “kleftiko.” Here’s what each said:

A. On page 159 of The Foods of Greece, Kremezi has a recipe for “Lamb Roasted in Oiled Parchment (Arni Sto Harti, Kleftiko)” and writes in its headnote: “This is a contemporary version of kleftiko lamb, a famous dish in which lamb was roasted in its skin, buried in the hot embers of a fire… Usually you will find Arni Kleftiko cooked in one big parcel, but I have found that individual [parchment] packets are easier to serve. And it’s easier to open the small parcels without spilling the precious sauce.”

B. On page 123 of The Glorious Foods of Greece (published in Greek as Η Ελλάδα της Γεύσης), Kochilas has a recipe for “Goat or Lamb with Garlic and Cheese Baked in [Parchment] Paper (Kleftiko).” Her headnote states: “The word klephtiko comes from the Klephts, or mountain rebels of the Greek Revolution, who used to cook their food underground so that no steam or aromas would escape….”

C. On page 94 of Greek Cuisine (published in Greek as Ελληνική Κουζίνα Μαγειρική), Alexiadou has a recipe for “Lamb Parcels (Arni Kleftiko)” which she says should be cooked in either parchment paper or thick aluminum foil.

D. On page 206 of Flavors of Greece, Barron has a recipe for “Lamb Klephtiko, Arni Klephtiko” about which she states, “In this classic dish, thick slices of lamb … cook gently in a tight paper parcel from which no juices or tantalizing aromas can escape.”

On-line sources confirm that in Greece today, the term kleftiko may refer to dishes cooked in packets made of parchment paper, foil, puff pastry, or filo. See, e.g.:

Although lamb (or goat) is the most commonly used meat in kleftiko, it is not the only one. In the modern Greek culinary community, kleftiko may refer to a specific lamb dish, but also is used to refer to the technique of cooking in closed packets. On the pages referenced above, here’s what the Greek food experts said:

A. Kremezi says, “Many variations of Kleftiko can be found today throughout Greece, some containing vegetables (zucchini, eggplant, peppers) and even tomatoes.”

B. Kochilas says, “Nowadays, klephtiko has come to refer to any food that is somehow wrapped or sealed during cooking.”

C. Barron says, “Traditionally only lamb, goat, and fish are cooked this way but this wonderfully flavorful method can also be used very successfully with vegetables.”

S. See also, “Originally klephtiko was anything baked in paper, but eventually it became a traditional way of cooking fish or meat, especially baby lamb.” http://www.recipe-source.com/main-dishes/meat/lamb/00/rec0093.html

27 Responses to Cooking in Packets Seals in Juices & Flavor