Blog of the Week: Libyan Food, Recipes from the Modern Libyan Kitchen

Blog of the Week: Libyan Food, Step by Step Recipes and Photos of Food from the Modern Libyan Kitchen

What: Libyan Food contains delicious recipes and fascinating information about Libyan food culture. It discloses no information about its author who describes the blog as being about “food cooked in the modern Libyan kitchen, based on traditional Shargawi [eastern Libyan] and Gharbawi [western Libyan], Amazigi [Amazigh/Berber mountain tribes in western Libya] and South Libyan cuisines” and “recipes recently imported into Libya from the rest of the Arab world.”

Why: Despite the dearth of information about the author and blog, the recipes on Libyan Food bring to mind normal daily Libyan life, something important to think about in these difficult times. 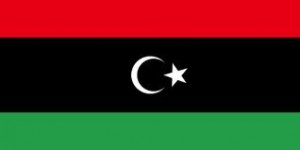 “For the past twelve days, everyone working on this blog has been riveted to the news, watching the events unfolding in Libya. We have family in Tobruk, Derna, Albida, Benghazi, Tripoli and Misurata, a reflection of the unity of Libya, and there can be no celebration for anyone until the whole of Libya is freed. The important point for us is to stress that this is not a civil war, this is a regime waging war against its own people, and Libya cannot be split, because as our family proves, the 6.5 million people in Libya are inextricably interlinked. However since today marks the tenth day since the official start of the revolution, and since a transitional governing body was announced yesterday, we thought it would be appropriate to put up the new flag of Libya, the pre-Gaddafi independence flag which has been hidden away for 42 years. We offer our condolences to everyone who has lost loved ones, may all the martyrs of Libya rest in peace.”  Libya, February 27, 2011 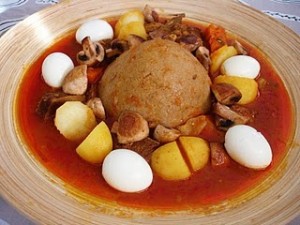 “Bazeen, an Amazigh [Berber] dish most often made from barley, is one of the most distinctive North African dishes. It is a staple in Western Libya, and often served for lunch on Fridays. There are variations on the basic bazeen, such as bazeen with camel meat, lamb meat, chicken, bazeen with garneta (squid), bazeen with broad beans (foul mdashash) or with dried meat (gedeed) and a thick soup (hassa).The most well-known bazeen is made of a mixture of 3 parts barley flour to 1 part wheat flour. The flour is cooked in salted water to make a hard dough, and then formed into a rounded, smooth dome…Pour the tomato sauce around the dough. Arrange the meat, potatoes, …[and] hardboiled eggs [around it]. Bazeen is served with fresh chillies and lemon and is typically eaten in a communal dish, using the right hand.” Bazeen, December 19, 2010 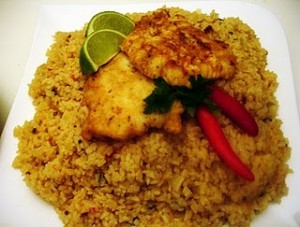 “Despite Libya having one of the longest coastlines on the Mediterranean, with the majority of the population living in the coastal areas, lamb and chicken based dishes dominate the cuisine. Seafood is eaten regularly though, some favorite recipes being Haraimi (fish poached in a spicy tomato sauce), baked Faruj (grouper), stuffed squid, and small fried fish with potato stuffing (Mubattan Samak). While sometimes eaten with bread, these are more often side dishes accompanying a main meal of Ruz Hoot. Ruz Hoot bil Kusbur is a strongly flavored rice with herbs and tomatoes, studded with crunchy coriander seeds. It is served with seafood, and traditionally cooked in a stock made from fish heads…Some like to grind [the coriander seeds before adding them to the rice], but whole coriander seeds give a nutty texture to the dish.” Herbed Rice with Coriander Seeds and Fish Fillets in a Cumin Marinade – Ruz Hoot bil Kusbur, October 1, 2010

Tried and Tested: I made Libyan Lamb Stew with Carrots and Green Olives and Libyan Harissa. Both are delicious, straightforward recipes, that don’t involve special techniques or require unusual ingredients. I’ll make Harissa regularly; Steven has started spreading it on every sandwich he makes. As for the stew, it will be a wonderful use for CSA-box carrots that sometimes build up in my refrigerator.

5 Responses to Blog of the Week: Libyan Food, Recipes from the Modern Libyan Kitchen

Previous Post: The Moosewood Cookbook: A Cookbook, An Obsession, A Soup